With the salary cap going down for next season to $64.3 million, the Chicago Blackhawks could be looking at some tough roster decisions this summer. And teams around the league are hoping that Bryan Bickell is one of the cap casualties that the Blackhawks have to let go of. 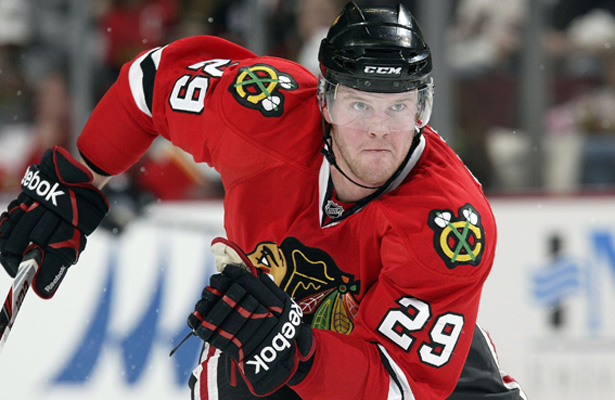 Bickell has quietly emerged as a leading free agent options for teams looking to add size, grit and skill. Thanks to a solid postseason run, in which he has eight goals and five assists so far, Bickell has found himself on the radar of many teams heading into free agency.

Bickell put up 23 points this season with the Blackhawks in 49 games. And while he brings size, with only 25 penalty minutes this year, he isn’t a huge liability to take bad penalties. Instead, he offers teams a good net-front presence and someone who can skate on the first or second line with the skilled players and do his part offensively.

The Blackhawks find themselves with 21 players signed for next season with roughly $2 million in available cap space. With most teams carrying 22 or 23-man rosters, the Blackhawks aren’t in terrible shape. With backup netminder Ray Emery scheduled to become a free agent, the team will certainly need to locate a backup goalie that will eat some of that cap space.

Looking to the future, there is also some talk of who could become the casualty of a compliance buyout. Corey Crawford has been mentioned casually in this conversation. Although he isn’t scheduled to become a free agent until after next season, he is almost guaranteed a significant raise over his $2.66 million cap hit this season.

Marian Hossa is another possibility. Signed until 2021 at a $5.275 cap hit, a compliance buyout on Hossa would give Chicago the space to re-sign players like Bickell or Viktor Stalberg and still leave the team with some wiggle room.

While not an offensive powerhouse, Bickell has shown a good upside as an offensive contributor. He should be able to secure a contract in the $2-$3 million per season range thanks to his strong postseason play. And at 6’4, 226 pounds, several teams would love to add his size to their top six.