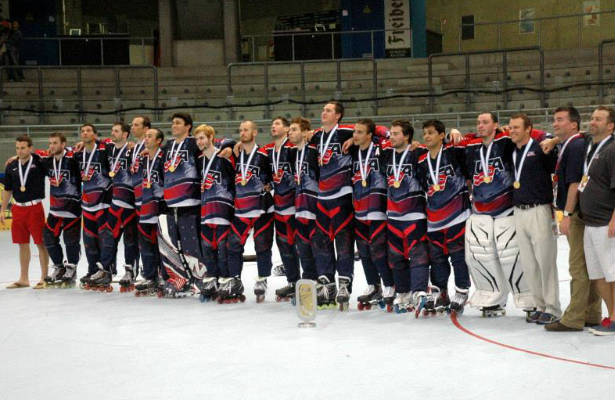 The 2013 IIHF Inline World Championships are finally over! Team USA went undefeated throughout the tournament and we came home with a gold medal and the right to call us WORLD CHAMPIONS! However it wasn’t an easy ride for us.

We ended round robin with the first seed and a trip to the Quarter Finals against the host team, Germany. Germany is a team full of skill and strong players. This year they were missing a couple of their star players due to the Ice Hockey World Championships that were held a couple of weeks prior. The game was actually very tight and the Germans came out hard on us. Germany came out with an early 1-0 lead but the team stayed poised and focused. Kyle Novak (MO) scored his first international goal to get us on the board. From there, the flood gates opened up a little bit for us and we won 7-4.

On Friday, we played our Semi Final game against Slovakia. The Slovaks took out the #1 seed in the other pool (Finland) in a huge upset to get to the Semi Finals.  We played Slovakia earlier in the tournament and ran into a hot goaltender. We were able to that that game 4-1. This time we came out even stronger and scored some early goals to set the tone for the game. This was the best we played all tournament and it was great timing. Our forecheck and defensive play was outstanding. There were multiple goal scorers and it was great to see everyone contribute. We moved on to the World Championship game with a 11-4  win over Slovakia!

Finally the game we have been waiting for all year arrived and we were just amped to get on the floor. Team USA vs. Sweden for the gold medal game. The Swedes had numerous players who were drafted to the NHL and each player has played some sort of professional hockey. These guys were big, skilled, and hockey savvy. Our boys were definitely up for the challenge. As I said in an earlier blog, our skating was a huge difference maker for this tournament. Our players are all true and natural roller hockey players. Yes, we do have players that play professional hockey, NCAA, USHL, and in NAHL but roller hockey plays a huge role in their ice hockey development.

Both teams traded a couple chances early on then Neilson Archibal (CA) flew down the boards and sniped a short side shot to get us an early 1-0 lead. Sweden came back strong and buried two goals to get them the lead going into the second half of play. There are four periods at the IIHF World Championships so it is a little different than what we are used to in the States. During halftime the fellas were very calm and collective. We talked about limiting their chances and playing a little smarter. We knew that if we kept trading scoring chances with them that the game could go in the Swedes favor.

We started the 3rd period with a power play opportunity and Travis Noe (CA) scored a lazer from the top of the PP to get the game even at 2. Both teams traded a couple power play chances but didn’t connect. Moments later Rob Alexander (CA) cashed in on another power play opportunity to make the score 3-2. The Swedes tried over loading Travis Noe’s side on the PP and challenged the rest of power play shooters. However, Rob proved to be just as deadly. Our two goals were the only notches on the board for that period. 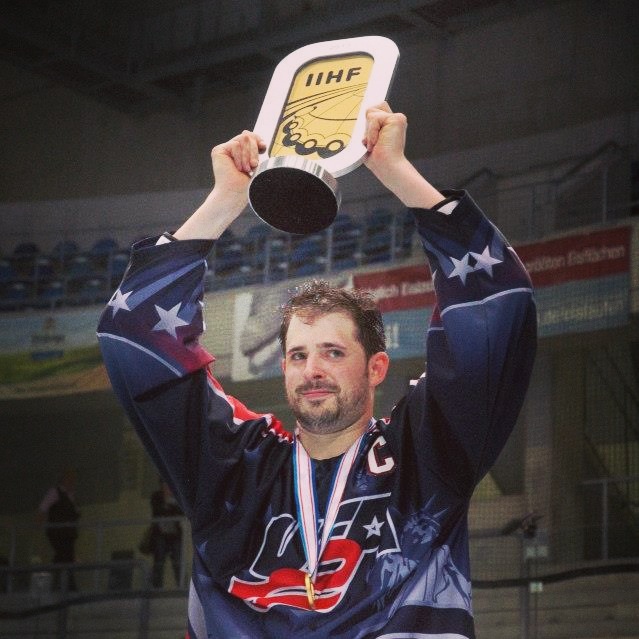 The boys knew that this game was far from over though. We really tightened up on the defensive side of our game and limited Sweden’s scoring chances. Kyle Novak (MO) made an outstanding pass on a 3 on 2 to Travis Noe (CA) to make the score 4-2. Thirty seconds or so later, Sweden capitalized on a broken play and scored on a great passing play. The score was now 4-3 but that didn’t last long. Matt White (CA) and Pat Cannone (NY) cashed in on a beautiful 2 on 1 play where Cannone crashed the net and buried a rebound goal to make the score 5-3. Time kept ticking on the clock but it seemed like the game was taking forever to finish. Sweden took a couple bad penalties and you could tell that they were getting frustrated out there. Travis Noe would finally get his hat trick to make the game 6-3 and make the game out of reach for Sweden.

It was a great feeling and winning definitely made the trip that much better. We started off our journey as individuals battling to make the squad and ended as a team of CHAMPIONS! I wouldn’t trade it for the world. Head Coach Joe Cook (CA) and Assistant Coach Dan Brennan (CO) did an outstanding job at keeping our team focused the entire time. Every move they made seemed to be the right one! It was a true honor to represent the United States and I think our boys did an unbelievable job.

Hopefully USA Roller Hockey can defend the title in the Czech Republic next summer!