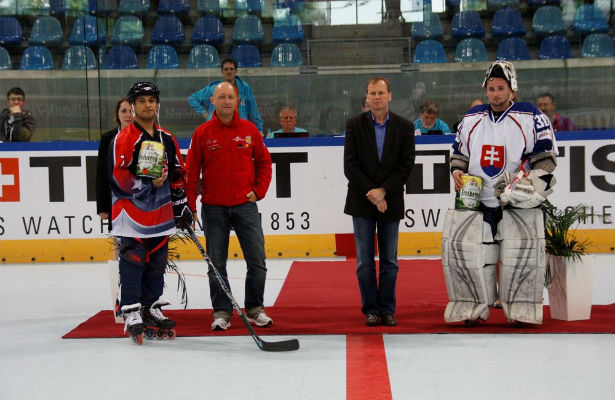 Game 3 against Slovakia was everything that we thought it was going to be. We knew it was going to be a slower pace and a more patient game. Slovakia sat back into a trap and didn’t really give us too many quality scoring chances. We had to pick our spots and be patient because they were just waiting for us to make mistakes so they could go off the other way on an odd man rush. We limited the mistakes and the Slovaks didn’t have too many scoring changes.

Dakota Eveland (CA) scored his first World Championships goal to get the USA on the board. Matt White (CA) followed shortly with a PP goal that just slipped in past the goaltender. The Slovakian goaltender played an outstanding game and didn’t allow us to bury and easy ones. He was definitely on top of his game.

The game was 3-1 until Junior Cadiz (CA) found a loose puck and banged home a five hole shot. With patience and discipline we played a puck control game and didn’t allow anymore odd man rushes. Jerry Kuhn (MI) had a great game in net and and stopped loads of point blank power play chances.

Junior Cadiz (CA) and the Slovakian goaltender received player of the game honors.
The team is feeling good going into the playoffs and both goaltenders are stepping up to the plate. We are really looking forward to our game against Germany in the Quarter Finals. The game will be played Thursday night at 2PM EST.
Guest PostIIHF Inline World ChampionshipsSlovakiaUSA
← Previous Story Visors Mandatory for New Players Beginning Next Season
Next Story → Florida Panthers looking for immediate contributors at 2013 NHL Draft