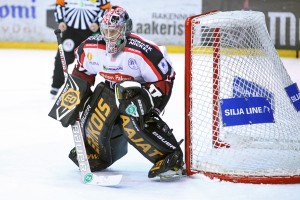 Antti Raanta signed with the Chicago Blackhawks Monday. He was the top goalie in the Finnish SM-liiga last season, winning both the regular season and playoff MVP awards while leading Assat to the championship.

If you think the Chicago Blackhawks are loaded now, they managed to gain some ammo for the future with the signing of Antti Raanta of Finland. The 24-year-old was named SM-liiga playoff MVP this season after — capturing the Jari Kurri Trophy, Finland’s equivalent to the Conn Smythe — while posting a 1.33 GAA and .955 save percentage for Assat. Raanta led Assat to the league title this year in addition to winning the league’s top goaltender award and regular-season MVP.

According to Elite Prospects, Raanta stands at 6-feet tall and 197 pounds. He made his national team debut last month at the World Championships where he appeared in seven games with a 2.09 GAA and .928 save percentage and led the Fins to a fourth place finish where they lost to the United States in the bronze medal match.

No surprise he came on many NHL teams radar, and he chose to sign with Chicago over Minnesota, Edmonton and Winnipeg  according to Juha Hiitela of Urheilusanomat.

For those wondering about the current Chicago goalies, though neither is signed past 2014. Ray Emery reaches UFA status this summer while Corey Crawford becomes a free agent next summer. We would expect Raanta to compete for either the backup position or spend a season getting used to the North American game in Rockford before competing for a starter role in 2014 after Crawford leaves. Crawford will command a hefty salary after his performance this season and it would be unlikely the team can afford him.