Because they occur during the first and second rounds of the Stanley Cup playoffs, most casual hockey fans don’t pay much attention to the IIHF World Championships that typically take place in Europe. The United States, Canada, and most other countries with heavy NHL talent typically send their best players that didn’t make the playoffs with a handful joining midway through when they are knocked out in the first round. For Canada, one of those players was Eric Staal of the Carolina Hurricanes. Wearing the captain’s C for the World Championships, Staal suffered an injury Thursday night in the quarterfinal against Sweden when Alex Edler initiated a knee-on-knee hit. 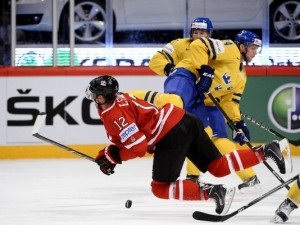 Staal was left on the ice in tremendous pain but eventually was able to leave and seek treatment. Edler received a five-minute major kneeing penalty and a game misconduct by the game’s officials. On Friday, the IIHF Independent Disciplinary Panel determined that Edler should have received a match penalty as a result of the play and suspended him for the remainder of the tournament. Sweden beat Canada in a shootout on Fredrik Pettersson’s winner in the fourth round.

Further medical tests on Staal determined he suffered a third-degree MCL sprain on his right knee and will not need surgery. He is expected to spend the next three months rehabilitating and is expected to be ready in time for the 2013-14 season.   If there’s anyone that’s reliable to be in the lineup every night, it’s Staal. In his nine NHL seasons, Staal has missed just 14 games, and only 12 of those due to injury/illness, having played in 690 of Carolina’s 704 regular-season games (98%) since the beginning of his rookie year of 2003-04. His current consecutive games played streak stands at 149 games, dating back to March 1, 2011.