Justin Abdelkader is one of the Detroit Red Wings’ biggest hitters, a role that has been diminished the past several weeks as he has spent time on the top line with Pavel Datsyuk scoring goal. But Abdelkader made his presence physically known in Game 3 of the Western Conference Quarterfinals between the Red Wings and Anaheim Ducks last night when he laid a heavy hit on defenseman Toni Lydman late in the second period. Abdelkader was assessed a five minute major penalty for charging and a game misconduct for the hit. He will also face a phone interview with NHL disciplinarian Brendan Shanahan to determine of the play warrants a suspension.

Did the refs make the right call in assessing a charging penalty and game misconduct and should Abdelkader be suspended for the hit? 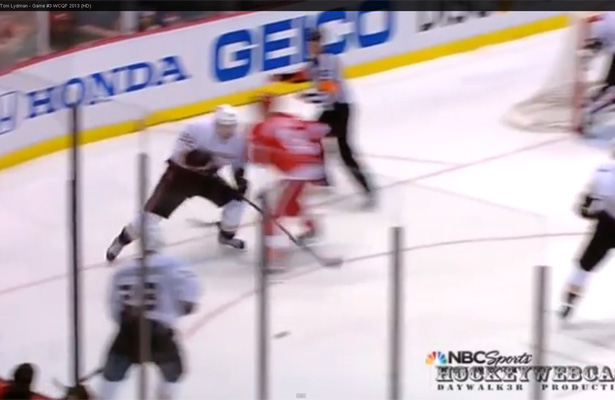 But it’s a little too little too late for the Red Wings as the five minute major opened the gates for Anaheim, allowing them to score their first goal early into the penalty to go up on the Wings 1-0. Much to their credit, the Wings went on to kill the remainder of the penalty, although Anaheim, a team that finished with the fourth best power play in the league during the regular season, looked disengaged during stretches of the power play.  Regardless, that goal stood as the game-winner for Anaheim as they went on to blank the Wings 4-0.

That doesn’t mean that goal was the reason why the Wings lost. The team failed to capitalize on several key power plays in the first period, including a 40-second five-on-three and over five minutes of power play time in the first period alone. Ducks goalie Jonas Hiller turned away 23 shots for the shutout, and captain Ryan Getzlaf came up big with a shorthanded goal when he poked the puck away from Damien Brunner, slipped around Jimmy Howard, who came out for the poke-check, and slid the puck into a wide open net to give Anaheim a 2-0 lead. The rest of the game was all Anaheim from that point on. But it’s easy to wonder how much wind the penalty call and power play goal took out of the sail for the Wings.

The charging call is somewhat ambiguous, because the rule basically comes down to the ref’s discretion on the hit. The official NHL Rulebook states:

42.1 Charging – A minor or major penalty shall be imposed on a player who skates or jumps into, or charges an opponent in any manner.

Charging shall mean the actions of a player who, as a result of distance traveled, shall violently check an opponent in any manner. A “charge” may be the result of a check into the boards, into the goal frame or in open ice.

Recognizing the play developing, Abdelkader came at Lydman from about the top of the circles. It was a big hit, but the rulebook doesn’t specify what constitutes “violent.” However, Abdelkader clearly stops moving his feet several seconds before the hit and glides into it, leaving the indication of a clean open-ice check without any violent intentions.

The other things to consider are whether Abdelkader left his feet on the hit and if Lydman’s head was the principle point of contact. If you watch the video carefully, neither is the case.

Watching at a fast speed, you clearly see Abdelkader’s feet leave the ice, but this occurs after he initially makes contact. His feet were still on the ground when he made contact, and the force of the blow brought him up off the ice. Take a look at the picture. Although grainy, this is the point of contact and shows Abdelkader’s left foot still on the ground. He didn’t jump into the hit, rather the force of the hit uprooted him.

You can also see from the picture that the initial point of contact is Lydman’s shoulder, not his head. And reading the official rule on this gives us more insight into why it was a legal hit:

Rule 48 – Illegal Check to the Head

48.1 Illegal Check to the Head – A hit resulting in contact with an opponent’s head where the head is targeted and the principal point of contact is not permitted. However, in determining whether such a hit should have been permitted, the circumstances of the hit, including whether the opponent put himself in a vulnerable position immediately prior to or simultaneously with the hit or the head contact on an otherwise legal body check was avoidable, can be considered.

Take another look at the photo. Abdelkader makes contact with Lydman’s shoulder, but also consider the position that Lydman is in when contact is made. He is leaning into the hit, with the majority of his weight on his left foot and his head out. As far as the rulebook is concerned, this could definitely be an instance where a player has put himself in a vulnerable position. The fact that Lydman was in a vulnerable position and had his head out is what led to Abdelkader eventually knocking Lydman’s noggin, but it still wasn’t a malicious intent to hit his head and the initial point of contact wasn’t Lydman’s head. Abdelkader also clearly has his left elbow down and tucked inside, so any thought of this being an elbow to the head is void as well.

Plainly put, this was a clean, open ice hit that the refs got wrong and should not result in any type of suspension. It’s unfortunate that the major penalty call resulted in the game winning goal for the Ducks, but the fact that the Wings failed to capitalize on numerous power play opportunities is what did them did them in and lost them the game.

Check out video of the full play below: