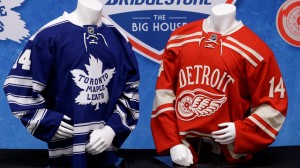 The uniforms the Red Wings and Maple Leafs will wear in the 2014 Winter Classic.

It was only appropriate the 2014 NHL Winter Classic will feature the two teams who were supposed to meet this season for the league’s biggest event. Detroit and Toronto were set to play at Michigan Stadium four months ago, but that was cancelled due to the lockout. It was made official this morning that the two Original Six franchises will meet January 1, 2014 at the 110,000 seat stadium known as The Big House.

What will make the game more meaningful in 2014 is it will now be a divisional game as the two teams are set to compete in the same division due to league realignment effective this fall.

Commissioner Gary Bettman was in Detroit Sunday morning prior to the Red Wings’ 1-0 matinee loss to the Blues when he made the announcement. “We’ve been excited about going to The Big House, and we’re glad that the plans are falling into place to do everything we originally planned to do and more,” he said.

The jerseys both teams will wear were also modeled at the press conference. Detroit will wear a red jersey with a classic winged wheel on the chest in addition to DETROIT spelled out in an arch over the winged wheel. The striping pattern and arch Detroit wordmark inspired by the late-1920s Detroit Cougars. The front crest on the jersey will feature an early iteration of the winged wheel from the late 1930s Red Wings. The Maple Leafs will wear a royal blue ensemble  featuring the distinct striping configuration inspired by the 1930s Maple Leafs. The front crest of the jersey will feature a distinct wordmark from the inaugural Maple Leafs logo, revealed in 1927. The neckline design is taken from the sweaters worn by the Leafs throughout the 1960s and the running stitch detail on the numbers is a tribute to the Leafs’ sweater from the mid-1950s.

The festivites surrounding the Winter Classic will be some of the biggest ever seen, with events set to take place in both Detroit and Ann Arbor, Mich. In Detroit, a rink will be setup on the infield at Comerica Park, home of the Detroit Tigers, and will feature a full slate of games including American Hockey League games with Detroit affiliate Grand Rapids, OHL Junior games with the Plymouth Whalers, college hockey’s Great Lakes Invitational (Michigan, Michigan State, Michigan Tech, and Western Michigan are set to reprise the 2013 edition), and an alumni game with such high demand there will likely be two games played on New Year’s Eve. More than 100 alumni from both teams have asked to participate.

“The game is an event, but there (are) so many other things surrounding it. You talk about the alumni and I really look forward to getting back on the ice with Lanny [MacDonald] and Tiger [Williams]. In Detroit, they’ve had huge success over the last number of years and they’re going to have a little bit younger of an alumni team than us. But the fact that they’re having two games and every player who is an alumni of these two teams gets a chance to be a part of it, that tells you a lot about it,” Maple Leaf’s alumni Darryl Sittler said.

For those who enjoyed the HBO series 24/7 in past years, it is set to return in December. In addition, the series will air on Sportsnet in Canada.

The two teams haven’t been in the same division since 1997-98 when the Leafs moved to the Eastern Conference, but that doesn’t mean the rivalry hasn’t gone away. Detroit and Toronto have played 644 times since Jan. 4, 1927, when the Toronto St. Patricks defeated the Detroit Cougars, 2-1. In his remarks during the press conference Sunday morning, Tom Anselmi, President and COO of Maple Leafs Sports and Entertainment, made a point of saying Toronto has 276 wins in the all-time series while Detroit has 275. However, Red Wings general manager Ken Holland responded when he stepped up to the podium by pointing out Detroit has earned 646 points in the all-time season series while Toronto has 645.