The Toronto Maple Leafs are having quite a season so far and, if the playoffs were to start today, the Leafs would find themselves enjoying a trip to the post season instead of the golf courses for the first time since the 2003-04 season.

The Maple Leafs are currently eighth in the league with a goals per game average of 2.93. Their success has come in large part thanks to the emergence of two young stars – Nazem Kadri and James van RIemsdyk. Kadri, who has bounced between the big club and their AHL affiliate for several years, is currently second on the team in scoring with 11 goals and 14 assists. van Riemsdyk, who was dealt to the Maple Leafs in the off season from 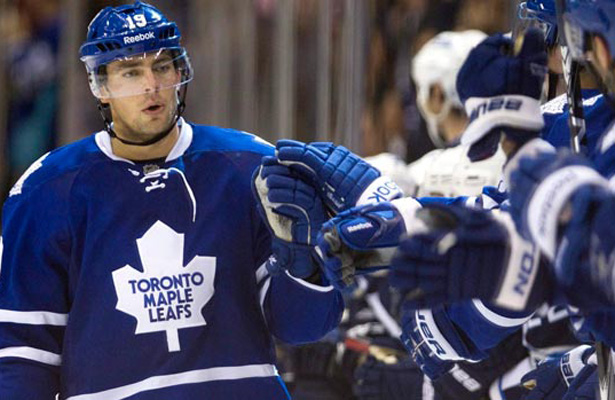 Philadelphia, is a close third in team scoring with 14 goals and seven assists in 28 games.

And the team is expected to get a boost in their offense this weekend when forward Joffrey Lupul returns to the lineup.

Lupul has missed the majority of the season after suffering a broken forearm after just three games. Lupul had zero points in those three games, but he is capable of putting up good numbers when he is healthy, as he showed last season when he netted 25 goals and added 42 assists for 67 points in 66 games. Doctors cleared the 29-year-old for contact, and he has indicated that he’s healthy enough to play and could make an appearance as early as this Saturday when the Leafs host the Winnipeg Jets.

While coach Randy Carlyle has not made an official announcement yet about whether Lupul will suite up Saturday, Lupul did practice with the team Friday morning. He skated on a line with Nazem Kadri and Nikolai Kulemin at practice. If that line holds up, it could bode well for all parties involved. Lupul is currently only owned in 49 percent of Yahoo fantasy hockey leagues, while Kadri is owned in 74 percent. Kulemin, who has two goals and 11 assists, is available in roughly 90 percent of all yahoo leagues.

Coach Randy Carlyle has not made an official announcement about whether Lupul will suite up tomorrow for the Leafs, but his return is imminent regardless if he plays Saturday or instead returns Wednesday against the Tampa Bay Lightning. The Leafs already have a lot of offensive firepower, and adding Lupul to the mix should only help make things better for the Leafs.