Anaheim extends Getzlaf for 8 years; how does that impact Corey Perry?

Facing the prospect of losing two of their most potent offensive weapons to free agency this offseason, the Anaheim Ducks solved half of the problem by locking up captain Ryan Getzlaf with an eight-year, $66 million contract extension. 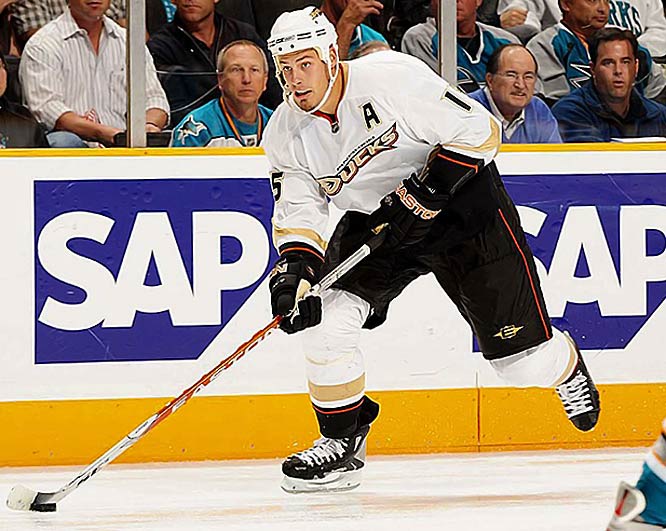 “It’s always been my goal to be here,” Getzlaf said on Tuesday. “I’ve always envisioned myself playing for one team, especially this organization, it’s been great to me. It’s nice to be settled in and know that I’m going to be here for a long time.”

Getzlaf is experiencing a strong outing this year with nine goals and 18 assists in 22 games for the Ducks. His size and physical presence, in addition to his playmaking ability, could have brought a lot of attention from clubs in free agency. But Getzlaf, who was selected 19th overall by the Ducks in 2003, opted to stay put in Anaheim.

“This is a wonderful day for my family, as Anaheim has become our home,” said Getzlaf, a native of Saskatchewan. “The fans here have treated me very well, and I look forward to being part of a winning hockey team and contributing to the Orange County community for years to come.”

While the Ducks have got to be happy that Getzlaf will be in Anaheim for the foreseeable future, the team still has a major problem on their hands with Corey Perry scheduled to become a restricted free agent at the end of the season. And it could be argued that Perry is the better-rounded of the two.

Just two years removed from his 50-goal season, Corey Perry had a down season last year with only 60 points, but still managed 37 goals. In fact, Perry has 20 or more goals in each of his past five seasons, including two 30-goal seasons and one 50-goal outing. Getzlaf, on the other hand, has never had more than 25 goals in a single NHL season and only tallied 11 en route to a 57-point campaign last year.

But both players are equally dangerous and, more importantly, a vital part of Anaheim’s offense. Together, they help compliment each others’ game. But with Getzlaf under contract now, Perry will likely want similar money in an extension. With the cap scheduled to lower to $64.3 million next season, if Anaheim is able to give Corey Perry the same extension as Getzlaf, the team will then have two players eating close to a quarter of their cap space. Add in Bobby Ryan’s $5.1 million cap hit and all of a sudden the Ducks have a third of their salary cap taken up in three contracts.

Granted, Teemu Selanne is a free agent at the end of the season, freeing up his $4.5 million if he decided to retire, play elsewhere or re-sign for less money. Same with Saku Koivu and his $3.8 million cap hit.

In the end, even if Perry gets the same contract as Getzlaf, the team has the ability to keep both players on their roster. But Getzlaf’s contract certainly sets the stage for what Perry can expect to see in contract negotiations with Anaheim, and if the team low-balls him he may decide to test the free agent waters at the end of the season.

But if Perry does sign within the next few weeks, expect the Bobby Ryan trade rumors to surface in full force.