This was the week where I thought we would have someone different at the No. 1 position. Los Angeles played Chicago about as tough as they could, but it was the Blackhawks who held on for the close 3-2 victory. The top two teams this week are running away with the division lead, while everyone else can be as little as a couple points away from shaking up the playoff picture. One of the beauties is because of the short season, every game is twice as important as they were in previous seasons. Teams can’t afford to give away points by poor power play units or taking bad penalties.

1. Chicago (LW: 1)- I’ve always been a long time fan of Ray Emery. I’m glad he’s found his stride since being in Chicago. He’s been playing solid this season when Corey Crawford needed a break. He could see more time because Crawford has been mysteriously been held out due to an “Upper Body Injury”. Word on the street is that it is a concussion, which could hurt both the ‘Hawks and my fantasy team. This week they will continue their hot start as they have four home games on the schedule. If there’s anyone who can beat them, look for Vancouver tonight.

2. Anaheim (LW: NR)- When I was writing the Power 5 last week, I was contemplating whether if I should place the Ducks or Red Wings at No. 5. Well I was proven wrong as the Ducks have been playing the best hockey anywhere in the league outside Chicago. They have won 12 games this season, the same amount as Chicago. What’s boosted their division lead is their league-best four shootout wins, with three coming in their recent six-game road trip. Like Chicago, they too have an unbeaten backup goalie in Viktor Fasth (8-0-0). This week they have an unheard of five days off before returning to game action Sunday as they take on Colorado before driving across town to play Los Angeles the next night. This rest might hurt a team that’s been playing so well as of late.

3. Pittsburgh (LW: NR)- They sure have found a way to bounce back after getting swept by the Devils last weekend. Take out those two losses and the Pens have won eight games in a row. On the bright side, they are finding their scoring touch as seen in a thrilling 4-3 win over Buffalo. Their +14 goal differential tops the East. If you want to beat them, stay out of the penalty box: their 27.4 power play percentage is second-best in the league. Their 3-3 home record could be of some concern, but we shall see if they can play better at home as they have games against Philadelphia, Florida and Tampa Bay. 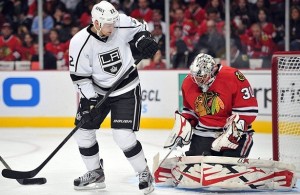 Chicago goalie Ray Emery makes a save during their 3-2 win over Los Angeles.

4. New Jersey (LW: 2)- Getting housed by the lowly Islanders will get you knocked down a few spots. Allowing three power play goals in any game isn’t good either. They are also 80.6 percent on the penalty kill, good for 20th in the league. What has been keeping them high in the standings is their 6-1-2 home record. Too bad they won’t get to put that to use much this week as they have five of their next six on the road.

5. Montreal (LW: NR)- After the rough start to the season, the Canadiens have been playing better hockey as of late. They went 4-0-0 last week including an impressive win over Carolina yesterday. They have been victims of the injury bug as of late, with forwards Brendan Gallagher and Max Pacioretty out with various knocks. After a disastrous season last year, they are right in the thick of things as they currently lead the division by a point over Boston. Tonight they began their first of three straight games against New York teams. They are at the Rangers tonight before hosting the Islanders and Rangers later on in the week.