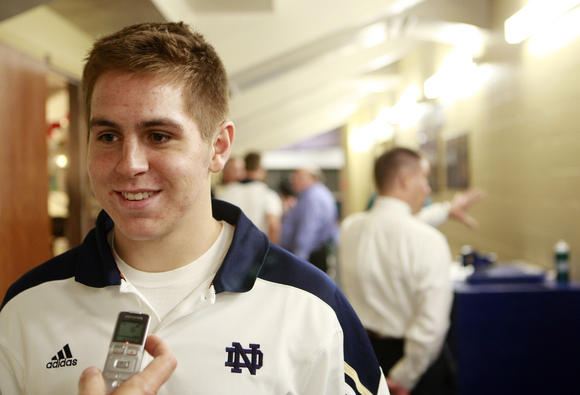 In an odd story first brought to light by ABC57 in South Bend, a Notre Dame hockey player has been arrested following his actions in a bar fight. The culprit, Jared Beers, was arrested on Sunday night after allegedly punching a female employee in the face. The incident took place at Brother’s Bar and Grill in South Bend.

Beers will face multiple charges as a result of the incident, including battery, intimidation, disorderly conduct, resisting arrest, and public intoxication.

The night got interesting at the bar when managers started receiving complaints that Beers was harassing women and stealing their drinks. Things quickly escalated from their as a female manager attempted to resolve the issue by asking him to leave. Beers refused to leave and instead ended up punching the manager in the face. According to the police report, Beers then stepped on her head and neck while she was on the ground, and pulled her hair. The manager would later be taken to the hospital to receive treatment.

When witnesses of the attack called the police, Beers fled the scene, leaving behind his wallet. Police officers later called Beers to notify him that they had his wallet, and he made his way to the station to retrieve it. When Beers arrived at the police station, officers placed him under arrest for his actions in the fight.

Beers, from Mishikawa, Indiana, is a defenseman at Notre Dame. The junior has played in eight games this season, collecting no points and two penalty minutes. His career high’s at Notre Dame were established in his freshman season. That year, Beers played in 25 games and picked up one goal and six assists.

The defenseman declined to comment on the situation following his arrest, but Notre Dame spokesmen Dennis Brown said “The university is aware of this incident and is confident that it will be handled in a professional manner through the criminal justice system. University discipline is handled privately, in accord with our own policies and federal law.”