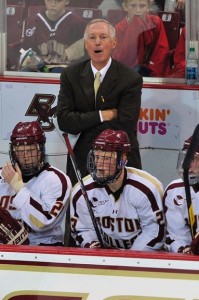 Earning a win in college hockey isn’t easy. Many things has to go right in your favor, such as scoring goals, making saves and avoiding the penalty box. But when you have done it over 900 times in the span of 41 seasons behind the bench, it is something noteworthy. But don’t tell that to Boston College coach Jerry York, who has always taken individual achievements with a grain of salt. He has always been about the team and when you have five NCAA titles to show for it, he’s someone you should listen to.

Saturday night at Kelley Rink, York earned win No. 924. Placing him at the summit of NCAA Ice Hockey coaching wins. He shares the top spot with Ron Mason, and will have the opportunity for win No. 925 Friday night at Providence. “It’s all about good players who want to get better and play as part of a team,” York told the Boston Globe. Mason and York have commonalities in that York took over for Mason at Bowling Green in 1979 when Mason left for Michigan State. Mason would go on and coach the Spartans until 2002.

York previously played for Boston College from 1963-1967. He would get his coaching start at Clarkson before moving to Bowling Green. He’s been at Boston College since 1994. He’s missed the NCAA tournament twice since the 1998 tournament. Ironically, the two seasons in which he missed the tournament (2001-02 and 2008-09) they were the defending NCAA champions. They are the defending champions this year, when they defeated Ferris State in the national championship game earlier this year. That trend is projected to change as they have an 11-2-0 record this season. The first loss was the first regular season of the game in October and the second was Friday night at crosstown rival Boston University.

The Eagles have been on an incredible run the past calendar year. They haven’t lost consecutive games in a year, when they lost to UMass-Lowell Dec. 9, 2011 and to Michigan Dec. 29, 2011. They went on a winning streak of 19 games to end the season; 18 of which they allowed two or less goals. They haven’t lost at home since losing 5-3 to Boston University Dec. 2, 2011.

It wouldn’t matter for York, but it would be nice for the BC fans to watch York break the record in New England. Should the Eagles not take care of business against the Friars, the next opportunity to reach win No. 925 would be in Minneapolis, Minn. at the Mariucci Classic. Three weeks from now they take on Alabama-Huntsville, who has scraped only 1 victory in 14 games this season.

His closest pursuer in coaching wins is across town at Boston University. Jack Parker has coached the Terriers since 1974 and he currently has 873 wins.