In the wake of high profile NHL returns by players such as Evgeni Nabokov and Jaromir Jagr, another pair of former NHL players could be looking to make comebacks this season.

Various sources are reporting that former NHL goalie Cristobal Huet wants to return to the NHL after a two-year stint in Europe. Huet bounced around the NHL for several seasons, failing to gain footing with any team he played for thanks to his inconsistent play. Most recently, Huet played two seasons with the Chicago Blackhawks before being loaned to HC Fribourg-Gotteron SA of the Swiss National League A. Prior to that, Huet played for the Washington Capitals, Montreal Canadiens and Los Angeles Kings. 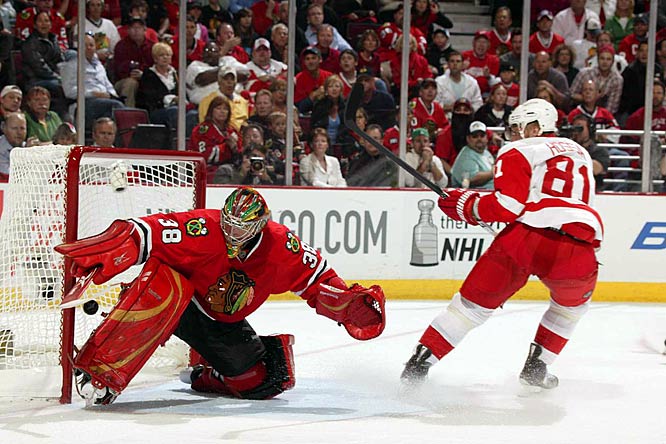 “I still belong, I’m better than some other guys, and I’d like another shot,” Huet said recently from Europe, adding his agent had talked to “a few” NHL teams. “I’d love to come back, but I know once you are out of the League a little bit, guys tend to forget about you and that’s the nature of the beast. But I still think I have something to show in the NHL, and to prove I still belong there. For me, it would be a great second chance to come back and play in the best League.”

Huet posted a career-best 26 wins with the Blackhawks in 2009-10, but his streaky play eventually allowed backup netminder Antti Niemi to unseat him as the starting goalie where he led the Blackhawks to a Stanley Cup victory.

The 36-year-old goalie is getting quite a late start to the party after announcing his intentions more than a month into the free agency period that began July 1. Plus, it’s highly unlikely that a team will pursue Huet as a starting goalie, rather a desperate team needing depth may look to add him as a backup or as insurance. The Boston Bruins could take a chance on Huet as a backup to Tuukka Rask on a one-year deal,  and the Calgary Flames could look at Huet similarly to backup Mikka Kiprusoff. The Los Angeles Kings could also look to sign Huet as a backup if they trade current backup Jonathan Bernier.

Huet could also receive interest via training camp tryouts. A team not willing to immediately commit to a deal could offer Huet a training camp tryout to see how he performs and then determine whether he warrants a contract offer. This is probably the most likely scenario to take place. It’s highly unlikely that a team signs Huet right out of the gate, especially since he’s been out of the NHL for two seasons now.

Or, similarly, a team could wait until an injury occurs and then sign Huet out of desperation.

Another former NHLer possibly looking to make a comeback is forward Miroslav Satan, who last played in the NHL in 2010 with the Boston Bruins. Satan tallied 14 points in 38 regular season games with the Bruins, and then added another five goals and five assists in 13 playoff games.

While Satan’s interest in returning to the NHL hasn’t been as widely confirmed, he could be a good fit for a team looking to add a touch of scoring depth and an additional salary to help meet the salary cap floor. The New York Islanders are supposedly interested in bringing Satan back. He previously played for the Islanders from 2005 to 2008.

With players such as Daymond Langkow, Jason Arnott, Marco Sturm and Brian Rolston still available in the free agent market, the chances of Satan landing with a team anytime soon are slim. Like Huet, Satan may have to accept a training camp tryout or wait until the middle of the season as injuries begin to take their toll on teams.