So how much money would you offer a 35-year-old forward who has scored 20 or more goals in nine out of his 10 previous seasons, but only twice hit the 30-goal mark? A lot, evidently.

According to a story published by the Globe and Mail today, Shane Doan could be looking to make superstar-type money in his next contract. The story claims that sources close to Doan’s talks with other teams say that Doan is asking for $30 million over a four-year period, which would give the lucky team who acquires him a $7.5 million cap hit for the duration of the contract.

Just for reference, that would put him in the same boat as Steven Stamkos, the 22-year-old Tampa Bay Lightning goal scoring machine who netted 60 goals last season, 45 the season before and 51 the year before that. 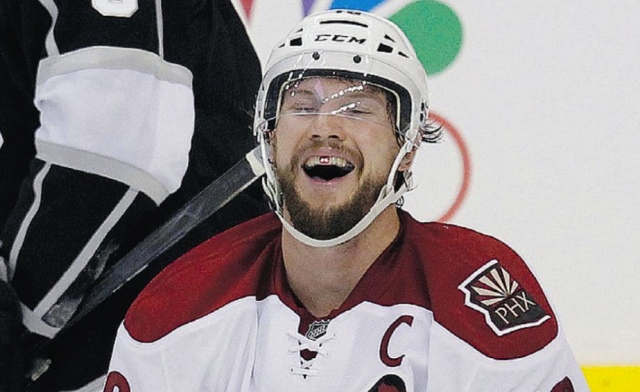 (Yes, it would also put him slightly above Scott Gomez who has a $7.357 cap hit for the next two seasons, but you see where we are going with this).

Last season Doan made $4.55 million with the Phoenix Coyotes – the last year of a five-year deal. However, Doan became an unrestricted free agent on July 1. He wants to play for the Coyotes, the only franchise he has ever played for, but he doesn’t want to deal with the uncertainty swirling around the current ownership predicament. If his reported asking price is true, however, then apparently ownership issues aren’t the only motivating factor that could draw Doan out of Phoenix.

Tons and tons of money could also do the trick.

The Detroit Red Wings had inquired about his services, but according to a report on MLive.com, they apparently took themselves out of the running “because his price is too high and “’teams in the East have offered him ridiculous amounts of money.’”

“Ken (Holland) made an offer, but we haven’t countered or had much negotiation,” said Terry Bross, Doan’s agent on Thursday night. “We haven’t eliminated anybody.”

Just to put things into perspective, the Canucks are out because they don’t have the cap space. The Penguins could squeeze him in at $7.5, but they’d be in a world of hurt if the salary cap is lowered next season thanks to a new CBA. Nashville could take the hit because, well, they lost Ryan Suter, and the Rangers are the destination of choice these days. The Canadiens are out thanks to Scott Gomez, but the real player here remains the Phoenix Coyotes, who sport a hefty $25 million in available cap space, making it easy for them to absorb Doan’s $7.5 million asking price – which is likely because they will need to add value to their payroll in order to meet the cap floor.