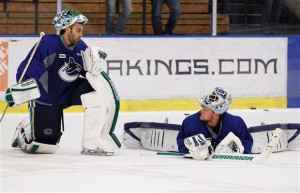 Should the Canucks find someone to take on Roberto Luongo's contract, expect the reins to be given to Schneider (R).

As the July 1 free agent signing period begins, teams are starting to secure their own players to long term contracts. Stanley Cup Champion Los Angeles Kings rewarded Conn Smythe Award winner Jonathan Quick with a long term deal. Vancouver prepares for potential life without Roberto Luongo by linking a pact with Cory Schneider and the Boston Bruins have come to terms with Tuukka Rask while Tim Thomas is on a one-year sabbatical. Here’s a recap of the transactions that went down today.

Rask can’t officially sign until July 1 because of the teams salary cap issues but they have come to terms on a one-year deal worth $3.5 million. He was a restricted free agent enter this off-season, and will remain under RFA status entering next summer. The one-year deal  could be designed to alleviate any doubts in goal the Bruins have with Rask while Thomas decided to take this season off. He’s battled injuries and hasn’t faced a starting goalie’s workload in his career. He’s never played more than 45 games in a season and he now has to take on a 55-60 game workload Thomas would face on a regular basis. The problem GM Peter Chiarelli now has is that his team is close to the salary cap ceiling of $70.2 million. They now have $9 million tied up in goaltending, which could make Thomas’ contract worth moving to someone that is willing to take the hit.

Entering the final year of his contract at $1.8 million, Jonathan Quick and the Kings agree on an extension that will keep him in Hollywood until 2022-23. The deal is totaled at $58 million and will have a $5.8 million cap hit. The team laid out their future in goal in the following team release:

Quick had a record-setting year in 2011-12 for the Kings and ranked amongst the NHL’s best in every major goaltending category.  He was even better during the 2012 Stanley Cup Playoffs as he led the Kings to their first-ever Stanley Cup championship.

Since they have their starter locked up, they now have a bargaining chip with backup Jonathan Bernier. He has some value as a backup as he went 5-6-2 with a .909 save percentage last season. The team can give him a few more games next year and could use him as trade bait at next year’s deadline or entering the off season.

Cory Schneider and the Vancouver Canucks agree in principle on a three-year deal worth $12 million. Previously Roberto Luongo’s backup, Schneider appears to have taken over the reins of starting goalie as the team will try to ship out the high-priced Luongo. General Manager Mike Gillis will try to find a buyer for Luongo, who’s monster-like contract lasts until 2021-22. Reports have surfaced that a return to the Florida Panthers could happen. Getting Schneider was a deal for the Canucks, as they were risking losing him to lesser teams that could have promised him more playing time. But it appears now he has the chance to replace one of the great goalies in team history- even if he didn’t play like one at all times.