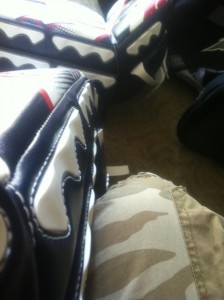 A pretty busy week for all things hockey.

Mission Slyde Goalie Pads: For all roller hockey players, both player and goalie alike, big things are coming this way. Mission is coming out with their new Slyde Goalie Pads that will allow goalies to move as if they are on ice. For skaters, looks like those easy one-timers won’t be as easy. For goalies, hopefully a better save percentage instead of the typical 10 goal games. The slide is possible because of a special slick plastic ridges from the base all the way up to the knee. The pads look to be out September 15th, so get your goals in while you can.

Extensions/Rumors: There have been some signings as well as some rumors going about.Norris Trophy winner Erik Karlsson agreed to a 7-year extension with the Ottawa Senators. It was more-or-less guaranteed, but still, this sets up the Senators for years to come with a solid franchise defenseman.

Veteran Alexei Kovalev is speculated to return to the NHL. What team you ask? Non other than his old team, the Montreal Canadiens. Knee injuries and overall old age has taken its toll on his performance, so you have to wonder if it would be in the best interest of the Habs.

The retirement of Nicklas Lidstrom has left a big gaping hole in not only the hearts of fans, but the defensive lineup for the Detroit Red Wings. Word is Nashville Predators Ryan Suter is going to test free agency. Coincidence? I hope not. Suter is a big, hard-nosed defender who is exactly what the Wings need. General Manager Ken Holland has a decent chunk of change to work with, but expectations of filling other roster spots with other big named players out there has left him, as typical, tight lipped.

Rick Nash of the Columbus Blue Jackets continues to be a topic of discussion as it comes to trades. Not sure on this one, we’ve been down this road before. So, for now, wait and see.

Surprising news as Jordan Staal of the Pittsburgh Penguins has turned down a 10 year contract with the team, opting not to sign a long-term extension before his contract is up. Staal is a vital piece of the Penguins lineup, playing both a physical game as well as having a career high 50 points last season. He would be an excellent addition to any team. Could he possibly be eying a future with either the New York Rangers or the Carolina Hurricanes to possibly play with either of his brothers?

Lebron James and the NHL: If you were to describe another sport to being the exact opposite of the NHL, what would you choose? The NBA would be high up there with their cheap fouls, individual showmanship and lackluster effort from their players. NHL players took to Twitter after Lebron James was showing a bit too much pain for a leg cramp. Anaheim Ducks center Nick Bonino tweeted it best, “We get it Lebron, it doesn’t hurt when you’re running around but it looks unbearable when the cameras are close up during the timeouts.”

NHL Draft: The first round of the 2012 NHL Draft is tonight beginning at 7 PM EST. The Edmonton Oilers have the first pick for the third straight year in a row (fixed?). They are expected to take Sarnia Sting forward Nail Yakupov. Ryan Murray of Everett Silvertips and Griffin Reinhart of the Edmonton Oil Kings are the top expected defensive picks while Swedish prospect Filip Forsberg rounds out the top four players. But, then again, you never know what can happen and who will be drafted in what order, so watch to find out.

That is a little bit of what has happened this week. See you next week.