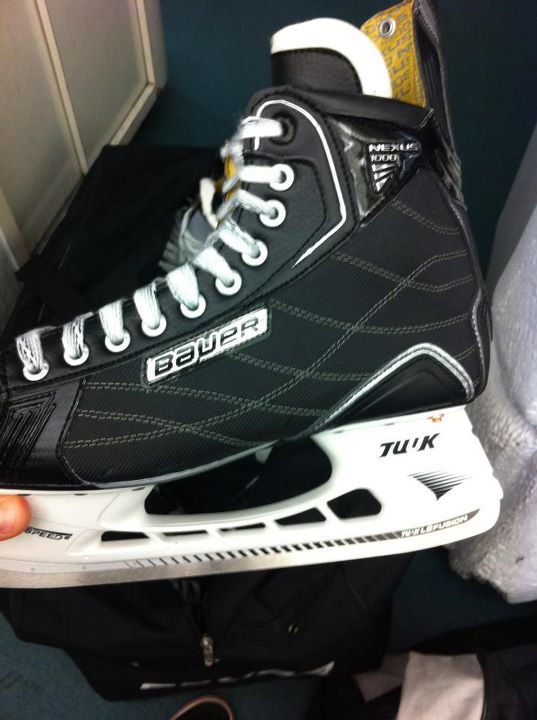 This post is part of a series of interview questions we conducted with Bauer Hockey. Throughout the month of May, we’ll be adding new interviews related to newly released or upcoming Bauer Hockey gear.

Bauer Hockey is preparing for the release of their highly anticipated Nexus Line of equipment, which includes skates, sticks and protective. If you’re as excited as we are about this new line from Bauer, you will be interested in reading our interview with TJ McMeniman, Senior Global Brand Manager at Bauer Hockey. Below is a transcript of our questions followed by his insightful responses.

Hockey World Blog: How did Bauer determine that it was necessary to create a third separate product line?

Bauer Hockey: The NEXUS family of product was born from a need BAUER noticed at both the professional and retail level. We realized not every player could use VAPOR or SUPREME due to a different need in either fit, performance or flex profile. We decided to take these commonalities and create a family of product that has a new style, feel and fit. The additional of NEXUS allows us to reach an entirely new consumer base who historically did not use BAUER because they didn’t fit in our skates, needed a different type of flex in their stick or required an alternative to what we offered in our current protective lines.

HWB: As the only company with three distinct product lines, what types of goals did you set for the Nexus line, or what were you hoping to achieve through the release of a third equipment line?

Bauer Hockey: With the introduction of NEXUS into the BAUER family of products we are trying to achieve one simple goal – have a fit for every player. No matter if you are a beginner skater, or playing professionally; BAUER now offers a fit for every player who plays the game. We are proud to be the first and only manufacturer to offer multiple fits across multiple price points in multiple categories.

Bauer Hockey: The NEXUS 1000 stick is based on a model we had been testing behind the scenes with several of our pro players. It was something we created to have a different flex profile than VAPOR or SUPREME, so the way it shoots is very different. The feedback we received was extremely positive; recognizing the fact that we were able to meet a new need at the pro level, we wanted to bring this additional flex profile to everyone. Thus, NEXUS was born. Having three unique families – VAPOR, SUPREME, NEXUS – with three unique shooting styles allows us to better serve players everywhere.
The TRU-Mid flex profile is designed to have a very easy, natural feel to it. Its key benefit is allowing players to get shots off quickly, thanks to a softer shaft in the lower region of the stick as well as in the handle area.

The shaft shape mimics that of the SUPREME family, as it has square corners with double concave shaft walls.

It has the same Power Core 3 blade as the SUPREME TOTALONE, where the combination of two foams keeps it lightweight and balanced with incredible feel.

The NEXUS 1000also features eLASTech Technology, our proprietary system that increases durability by reducing the spread of ‘micro-fractures’ that are caused by slashes, etc. It reduces the ‘fatigue’ a stick experiences over time to keep it feeling newer for longer.

Finally, like all of our top-end sticks, the NEXUS 1000 will feature:

HWB: What do pro players like about that type of flex profile?

Bauer Hockey: The most common comment we hear is regarding the quick release that it allows them to have and how it feels very ‘natural’, or ‘easy’. As the game continues to become faster and faster at the pro level, players’ ability to get shots off quickly becomes more and more important, and they love that the NEXUS allows them to do that.

HWB: How does the feel of the stick/feel of the puck on the blade differ from the Total One and APX?

Bauer Hockey Because NEXUS shares the same Power Core 3 blade as the SUPREME TOTALONE, the feel is very similar – great, forgiving feel in a blade that is lightweight and, even more importantly, very balanced.. When comparing the NEXUS 1000 blade feel to the VAPOR APX, players will find the NEXUS 1000 to be a bit more giving, as it has less Aero Foam inside, which increases stiffness.

HWB: What goals did you have in mind when setting out to develop the Nexus skates?

Bauer Hockey: When developing the NEXUS line of skates we wanted to offer a skate with a new fit targeting those players who currently didn’t wear BAUER due a fit issue or those who maybe wanted to try something new from BAUER. We also wanted to build a skate that had a more authentic look while still providing all the technology and performance players have come to expect from a BAUER skate.

HWB: What features should we expect in the Nexus 1000 skates and how will they differ from the Total One NXG and APX in terms of performance, comfort, and durability?

Bauer Hockey: The NEXUS 1000 utilizes an ultra light quarter package that provides the player with an “easy load” on every stride for more explosive acceleration. The straight wall construction allows the player to exert maximum power while absorbing more energy resulting in a smoother more efficient stride. NEXUS also has the widest and deepest fit of all BAUER skates. Because it has the deepest fit, players will experience quicker take off speed while keeping the player’s heel locked in place to ensure maximum performance. The NEXUS 1000 also offers an ultra thick pro felt tongue with a molded metatarsal guard to provide maximum comfort and protection from lace bite. Finally, NEXUS will feature the TUUK LS Fusion steel; a revolutionary blade design fusing the strength and performance of stainless steel with high grade aluminum, reducing the weight of the runner by 27%.

HWB: What are the key differences between the 3 skate lines, what advantages does each line offer, and what type of player were you targeting for each line?

Bauer Hockey: Each family of skate offers a different fit and performance benefit. Vapor is all about speed and agility. VAPOR has a more standard fit with a blocked tendon guard allowing the skate to respond faster and enable the player to experience faster feet and tighter turns. SUPREME represents power and strength. This family of skates has an “anatomical” or closer fit with a flexible tendon guard allowing the player to experience a more natural range of motion for a longer stride to generate greater power. NEXUS is where authenticity meets technology. This new line of skates offers a wider and deeper fit allowing the player to have explosive acceleration by getting lower in their “take off” stance.

All 3 families of skates are infused with today’s advancements in performance technology. your style of play or fit needs will determine which line of skates is best for you.

For those interested in upgrading their gear to the new Nexus line, head over to Pure Hockey to pick it up. The Nexus 1000 stick is currently available for pre-order and will begin shipping June 15th. Much of the rest of the line will also be available June 15th, however, the Nexus 1000 skates will not launch until October. If you’re picking up the Nexus 1000 stick from Pure Hockey, don’t forget to use the coupon code HOCKEYWORLD while you’re there to save 10% on select products with your purchase.