Defenseman Justin Schultz has left the University of Wisconsin last week and is looking to take his talent to the National Hockey League. 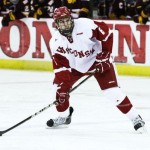 Schultz, who will turn 22 June 7,  still had one year of eligibility remaining. He “de-registered” from the university according to Bob McKenzie of TSN and could use a little-used loophole to vault himself to become one of the top free agent blue liners this summer.

The Anaheim Ducks drafted Schultz in the second round of the 2008 draft, but he was sent back to the junior ranks in British Columbia the following year. Because four years have elapsed since being drafted, the Ducks have 30 days to sign or trade Schultz otherwise he will become an unrestricted free agent July 1 and can sign with any team. Behind Zach Parise and Ryan Suter, it can be argued Schultz can be the third-best free agent on the market because of his raw talent and the ability to score points for his team. His 16-28-44 point season he had last year placed him second in points for the Badgers. The team had a disappointing campaign last season as they finished 10th of 12 teams in the WCHA with a 17-18-2 overall record.

Last season, Jason Gregoire of North Dakota and Blake Kessel of New Hampshire used the similar loophole to make the jump from college to the professional level. It’s unknown if Anaheim will or want to sign him, but if he’s speculated to be one of the top free agents on the market if the 30-day window expires they will be silly not to.