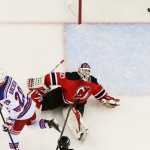 It has been quite a whirlwind eight weeks for Chris Kreider. Two months ago he was wearing crimson and gold on the ice, attending classes and was in the process of leading the Boston College Eagles to the NCAA Championship. Today he is wearing red, white, and blue, calls the greatest arena in sports home, and is two wins away from playing for the Stanley Cup.

In the process, Kreider has broken an obscure NHL record that has been on the books for 59 years by scoring the most playoff goals before making a regular season appearance when he scored his fifth goal of the playoffs in Saturday’s 3-0 Game 3 victory over New Jersey in Newark, NJ. His goal came early in the third two minutes after Dan Girardi scored the first goal of the game at 3:19. The previous record holder was Eddie Mazur of Montreal, but what made Mazur’s record impressive was that it took him three postseasons before cracking the lineup in the regular season. Mazur appeared in the 1951, 1952, and 1953 playoffs for the Canadiens, winning his only Stanley Cup in 1953. He left the NHL in 1957 and retired from hockey after playing in various minor leagues in 1965.

Kreider has five goals in 15 playoff games, placing him second on the team behind Brad Richards with six. Kreider is also tied for seventh in playoff goals along all players. Of the five players he’s tied with, only Los Angeles’ Anze Kopitar (+12) and Dwight King (+1) have a positive rating as everyone else has a negative rating.

Check out the video below of Kreider making history.