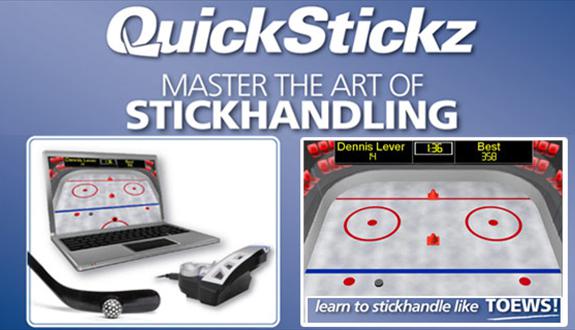 Off season hockey training can enhance your skill and take your game to a whole new level when you return to the rink, but only if you’re doing it correctly. As most of us are now in training mode after another exciting hockey season, this is the perfect time to take another look at the QuickStickz stickhandling training system. Our last review of QuickStickz was a very high level look at some of its capabilities. But now that we’ve had the ability to use it more, we can give some better feedback on the kind of results you may expect.

The drawback in the ball, however, is how well it moves on different surfaces. While the QuickStickz website maintains that their product is good on any surface – carpet or otherwise – we found it to not be as effective on some surfaces. For example, stick handling on a tile or hard floor was great and allowed the ball to move smoothly and more like a puck would on the rink. On carpet, however, we noticed the ball getting slowed down quite frequently. It became tough to continue training and working on keeping your head up when the blade of the stick would often roll over the ball when stick handling quickly.

QuickStickz is loaded with 18 drills that you can begin working with right away. The drills range from basic back and forth stick handling to more complex toe drags and the like, often requiring you to avoid certain objects on the screen to earn points. The drills are effective to the extent that you are completing a repetitive action and with enough repetition, you will master the movement. So as you continue to work your way through the drills, keeping an eye on the screen and not on the ball, you’re stick handling is going to improve. Perform a drill such as the “Windshield Wiper” enough times, and next time you’re in a game situation, muscle memory just may take over and help you execute that move with perfection.

On the flip side, however, these are all drills that you can do at home without the training system and only using one of the many stick handling balls available. You could even use a golf ball you have around the house and save yourself some money. Providing you have something specific you want to work on, such as a toe drag or a quick dribble, you can repeat the action as many times as you’d like. In fact, tossing a few pucks on a stick handling surface will work well as objects to stick handle around. Spending the same amount of time practicing with this technique should work just as well as the QuickStickz system.

The technology involved in this system is definitely what helps set it apart from other training resources, but what also holds it back.

To set QuickStickz apart, everything you do with it is interactive. This is the first system of its kind, projecting your stick handling ball onto your computer screen and allowing you to see just where its at. This level of interactivity will definitely help with the younger players out there who can’t just stand and stick handle. Our younger generations are more in tune to video games, and this kind of interactive environment will go a long way in training some of them. The replay value is always there, as you can continue to work towards more and more points, keeping kids interested in playing again and again.

As a drawback, however, this system is geared towards younger audiences. As a 26-year-old, I had a hard time wanting to continue to stick handle using this system when I could just stick handle with various balls and pucks in my basement and shoot into a net. This type of training holds much more value to me than repeatedly going through on-screen drills and trying to earn more points.

For both younger and older players looking to improve stick handling, their patience may run a bit thin at times with QuickStickz. While the infared sensors on the ball were supposed to work under any lighting conditions, I was forced to shut all the blinds and turn off lights in order to keep the puck in the right place on the screen. With lights on and windows open, the puck on screen would jump around and had a hard time staying in one spot. Even at various times running drills in ideal conditions, the puck placement on screen became inconsistent.

The QuickStickz stick handling system is definitely an interesting one. The developers are creative and clearly have a love for the game and helping players achieve better results. However, I believe they still have some work to do before this is a widely adopted training product.

While these younger players may keep coming back, it becomes harder to keep the adult player engaged. This was the common problem I experienced, as I continued to go back to stick handling on my own without the assistance of QuickStickz. Return value becomes increasingly important when spending $199 – the price of QuickStickz. After using, I’m convinced that I could achieve the same results by picking up my favorite hockey stick, a golf ball, and researching stick handling drills on YouTube.

If you would like to learn more about QuickStickz, head over to their website at QuickStickz.com. If you’re interested, you can order the training system directly from their site.

Leave us your thoughts about QuickStickz in the comments, or continue the conversation with us on twitter – @hockeyworldblog or @matthwb.