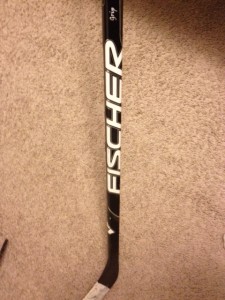 Fischer Hockey offers a range of composite hockey sticks in the SX line, from the top-of-the-line SX7 to the SX5, SX3 and the model I am reviewing, the SX1. The sticks are scheduled to be released in June, offering you plenty of time to think twice on what your next stick purchase might be.

To most, Fischer does not ring a bell when it comes to hockey. Nonetheless, their quality and design is top notch. Founded in 1924, founder Josef Fischer Senior began making handcarts and sledges in a wooden barn. In 1936 however, Fischer began making that of what it is known for today; skis. The company has been through the Second World War, the passing of the founder, leaving the company in capable hands of his two children, and many countless medals, including Olympic Gold medals and most recently, 51% of the Nordic Winter Olympic Games in Vancouver (CAN). They have branched out, bringing their research and design expertise into the hockey arena.

Appearance and Design: Fischer has done as nice job of branding their products with a prominent “Fischer” written on the shaft and their triangular logo on both the shaft and on the blade. Their logo reminds me of a radioactive sign. The primary color is black with white and grey accents, similar to that of the other SX composite sticks. The stick also features a translucent like webbing throughout parts of the stick. This webbing is not noticeable unless you look close but offers a nice little touch of style.

The SX1, like the SX3 and SX5, is made with carbon. While not quite certain on Fischer’s method to their madness as the the SX1 offers a grip finish, as does the other SX line besides the next jump up to the SX3. The SX3 only offers a matte coating. Back to the grip though, I notice it tends to be a little too grippy for my liking. Perhaps with a little more wear the grip will lessen a bit to a more preferred feel.

Weight and Balance: While it is targeted at being the lower end of a stick line, the weight is nothing like some lower end sticks that feel like you are carrying a tree with you. It is light enough to know you are using a one-piece composite stick, but still heavy enough to know it is for the budget friendly player.

Stick Handling/ Feel: Although I have been used to using a top-of-the-line stick in the Dekree DC300, I have been pleasantly surprised with the performance of the Fischer SX1. The blade is a little larger of a curve that I am used to, but provides a better cradle of the puck. Factor in that it is still a decently light composite stick and a length of 61”, the stick adapts to any play. Whether I play defense and need a good reach for a poke-check or playing up front doing a few dangles, the stick has me covered. 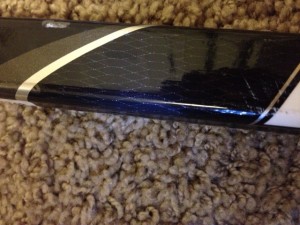 Shooting and Accuracy: This is where I think you need to be a little more in-tune with your play style to decide what works best for you. I’ve become more accustomed to an 80 flex as I rarely take a slapshot, primarily taking wrist shots. The 90 flex on the SX1 in addition to the P88 curve provides an excellent wrist shot. In HWB’s testing, the SX1 was right near the top of scoring for my wrist shots.

However, if you are more of a rip a slap shot from the point type of guy, you need to know what works for you. As stated, I’m used to using the 80 flex, so jumping up to a 90 flex does make a difference. But, throw in a little heavier of a stick than normal, to me, the stick is too stiff for a decent slapshot. I can really feel a recoil in my shoulder, never really feeling a good motion from ice to puck to target. Now that does not mean it is a bad stick, quite the contrary. For the SX1, being the lower end model of it’s line, I would suggest going down a flex more than what you are used to.

Overall Impressions: The review has highs and lows, depending on what you are looking for in a stick. But at $149.99 a pop, as long as you make sure you get the right flex and curve, the stick will hold up and perform at a good level. Now it is not quite competitive hockey level type of stick, for that HWB suggests the Fischer SX7. But, for a recreational/ beer league player, the stick will do the trick. A unique stick that most others will not have paired with the technology brought from a highly reputable manufacturer of skis, the SX1 is worth a purchase. If it is something you want to check out, you will have to wait until June of this year for it’s release. More information can be found on Fischer-Hockey.com.