Headlines Around the League

– The Ottawa Senators play host to the New York Rangers in game 6 of their series. Ottawa leads 3-2 and hopes to send the Rangers home back to the Big Apple preparing for their off-season. Captain Daniel Alfredsson is returning for tonight’s game the starts 7:00 PM EST on NBCSN. Ranger’s Carl Hagelin who injured Alfredsson with an elbow to the head will also return from his 3 game suspension. Ottawa has won the last two games, one at home and most recently in MSG. Expect the fans to be loud as the Senators are the last Canadian team still alive in this year’s playoffs.

– Phoenix Coyotes travel to the Windy City to try and knock the Chicago Blackhawks out of the playoffs. The Coyotes have won both games in Chicago already and look to bounce back after losing in Phoenix on Saturday. All 5 games have gone to overtime so expect the 9 PM EST gametime start on CNBC to go a little late tonight.

Both goalies, Mike Smith of Phoenix and Corey Crawford of Chicago have played very well. Key players to watch is Antoine Vermette and Shane Doan of the Coyotes as well as Jonathan Toews and Patrick Kane of the Blackhawks.

Vermette was acquired in a trade from the Columbus Blue Jackets and currently leads the team with 3 goals and tied for first with 4 points. Doan on the other hand has been nearly absent, only recording 2 points in 5 games played. Expect him to step-up tonight. 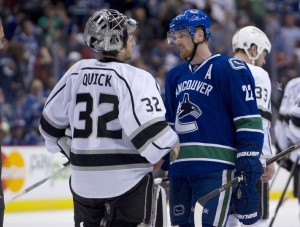 Toews is currently leading the Blackhawks as any good captain should. Toews currently has 2 goals and 2 assists while Kane has 4 helpers. The team will of course be missing Marian Hossa after an ugly hit by Raffi Torres.

– Speculations will begin to surface as the Detroit Red Wings were knocked out of the playoffs. Will Nicklas Lidstrom retire or play another year? Lidstrom’s decision is in part decided on, whether or not longtime friend Thomas Holmstrom plans on retiring also. If I had to throw out a probability, I would say 75% that Lidstrom retires.

– No riots have been reported after the Vancouver Canucks were knocked out of the playoffs by the Los Angeles Kings. That is a good thing, but their contract with netminder Roberto Luongo is not. Locked up until the 2021-2022 season, if this is not a deterrent for GM’s to avoid long-term deals, I do not know what is.

Backup Cory Schneider on the other hand is a bright spot. He played exceptionally well, with a 1-1-1 record, Schneider posted a 1.31 goals against average and a .960 save percentage. He is currently a restricted free agent and his terms of his contract have not been decided. Clearly deserving of a number one spot, the question though, will that spot be with the Canucks? Looks like another bad sign for Canucks’ fans.

– Pittsburgh Penguins are out of the playoffs, a heavy favorite of most playoff pools. Philadelphia Flyers’ fans are all happy of course, especially with all the rough stuff that happened during the series. Always nice to not only beat a team physically, but also on the scoreboard. NHL fans should rejoice as the officiating should return back to normal without the phantom calls.

– Brendan Shanahan has been contracted out to the NBA to see over the elbow thrown by Ron “Metta World Peace” Artest. The elbow, which was claimed to have been an over reacted celebration, hit the head of Oklahoma City’s James Harden. Due to Artest’s status of being a repeat offender, it is expected he will be given a lengthy suspension with a video pinpointing the errors and explanation of suspension.

There is a short recap of a few things happening in the NHL. Game on as the NHL Playoffs continue.