Traditionally a ski equipment manufacturer, Fischer Sports also offers a full selection of composite and hybrid hockey sticks, shafts and blades as well. The Fischer SX5 is Fischer’s second-tier offering in a line that features the top-end SX7, as well as the SX3 and the SX1. While not widely known as a hockey manufacturer in North America, Fischer has a long history of manufacturing hockey equipment in Europe where their products can be seen in the Swedish and Finnish Elite Leagues and in the KHL as well.

A special thanks to the team at Fischer Hockey for providing us with an SX5 to put to the test in our long term review process. Keep reading to see our initial impressions findings of the Fischer SX5.

Modifications: Cut 2 inches off the butt end of the stick

The Fischer SX5 features some nice graphic elements on a predominantly white shaft with some black color blocking and red accenting. The red is features much more on the top half of the stick, giving way to a heavily white 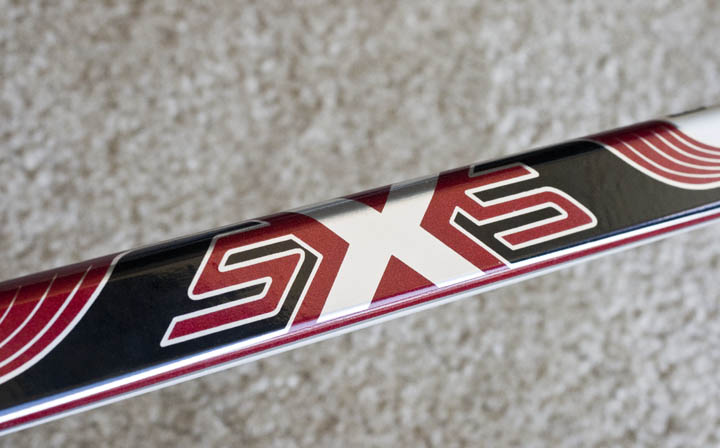 shaft that abruptly cuts to black near the slash zone of the stick and into the blade. The SX5 also features some slight silver accenting throughout the design as well.

My demo model feature’s Fischer’s grip coating – a mild grip that helps keep your hands on place on shots but still allows for good hand movement when you are skating and stick handling.

Again, I don’t have the weight specifications to compare to other brands’ sticks, but the Fischer SX5 is noticeable bottom-heavy. Not being Fischer’s top-of-the-line hockey stick, this is something that I expected and have actually been pleasantly surprised that the heavier weight hasn’t been much of a factor while playing. The only time I really took note of the heavier weight was on a play where I went to poke check a puck that had popped loose and really felt like the weight hindered my ability to get a quick poke at the puck. Otherwise, the weight has mostly been a non-issue.

Surprisingly, stick handling may be my favorite thing about the stick. For being heavier toward the bottom of the stick, I’m actually really impressed with the feel for the puck that the blade provides. For both ice and roller, the Fischer SX5 offers very good control and a solid feel for the puck. The stick performs well both sending and receiving passes, and the excellent feel for the puck on the blade allows for more heads-up playmaking.

In our initial testing session, my accuracy with the Fischer SX5 scored well below my average accuracy point. I found that I was pulling many of my shots just left of the target (I’m a right-handed shooter). I attribute this to the curve of the stick, which has a slight hook at the toe. However, as far as I’ve noticed in a few games worth of play, this isn’t an issue that has translated into actual game play. 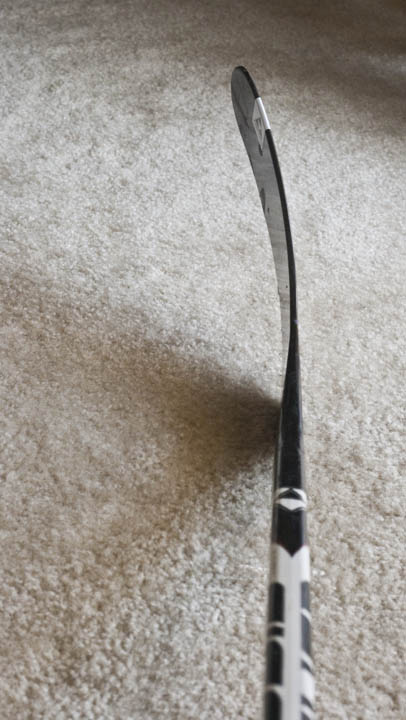 During games I find my shots are pretty much right on the money. High or low, I’m able to hit my mark consistently.

Another impressive point for this stick is the power it generates on wrist-shots. I find I am easily able to load up and snap off powerful wrist-shots quickly and accurately. I think any forward would really be happy with the SX5’s performance in this area.

Slapshots lack compared to wrist-shots with the SX5. While I get okay velocity on my slapshots, I don’t find that the stick loads up and transfers the power for slapshots in the same way it does for wrist-shots. Accuracy on slapshots is consistent, and I’ve scored several nice slapshot goals with this stick. In fact, on slapshots I actually find that slight hook on the toe of the blade to be beneficial, as I can cock my wrist a tad more or less during the follow through to get the puck where I want it to go. Still, the velocity and power transfer isn’t as prevalent on slapshots as it is on wrist-shots.

After a few games of play, the SX5 shows definite signs of wear with some basic scuffs and surface bruises. However, during my last game I noticed a distinct rattle inside of the shaft. So I untapped the butt of the stick, took out the stopper and flipped the stick over to see what was rattling around inside. A small chip tumbled out. Nothing too concerning, but definitely something to keep an eye on in the future.

Otherwise, the blade of the SX5 still looks very good with no external cracking or chipping and the slash zone of the stick looks good as well minus some basic scuffs. Besides the small chip from the inside of the shaft, the stick seems to be holding as expected.

I didn’t know what to expect from the Fischer SX5 hockey stick, but this stick definitely has some very good qualities. Accuracy is very good all around, and forwards will likely appreciate the good feel for the puck that the SX5 provides, and they will also love the power the stick presents on wrist-shots. However, I don’t feel that slapshots have that same power transfer as wrist-shots do, leaving a little something to be desired for defensemen who like to shoot from the point. Durability hasn’t been much of an issue yet, but a small chip from inside the shaft definitely needs further review. Overall, while not a top-of-the-line stick, the Fischer SX5 offers good performance and good value for rec league players.

Interested in purchasing the Fischer SX5? Check them out online at www.fischer-hockey.com  Have any more questions about this stick? Feel free to contact Chris on Twitter @HWBChris for more info!