Rangers and Senators’ Series Worth Watching 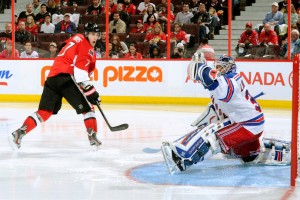 In a playoff plagued with unneeded shenanigans and excessive referee interference, one series is definitely worth watching. The #1 seeded New York Rangers and the #8 seeded Ottawa Senators are all tied at two a piece, returning back to New York Saturday night.

In Hockey World Blog’s Playoff Bracket Prediction Challenge, 89% of participants favored the Rangers to defeat the Ottawa Senators. Furthermore, 12% of participants feel the Rangers are going all the way this year. That percentage is tied for the second highest behind a 33% favored Pittsburgh Penguins. Sadly, of the few that predict the Senators to win the first round, none of them expect them to go any further. However, the games are not based off of predictions, but decided on the ice.

Game one the Rangers won by a score of 4 – 2. All big names played well as Marian Gaborik, Brad Richards and Daniel Alfredsson netted goals. King Henrik Lundqvist stopped 30 of 32 shots and picked up the win.

Game two was a little tighter play with the winning goal by Chris Neil in overtime. Neil also picked up a fight earlier in the game and was an assist away from a Gordie Howe Hat-trick. The win is great to have but unfortunately the Senators suffered the loss of Captain Daniel Alfredsson by a blow to the head. The hit came from Carl Hagelin who, while attempting a check, elbowed Alfredsson in the head. While Alfredsson has come out since stating he did not feel Hagelin intended to injure him, Hagelin received a 3 game suspension and Alfredsson has been out since.

Traveling to Ottawa, the Senators feeling comfortable splitting the first two games, the two teams went two and a half periods without scoring. The score-sheet was eventually cracked as Brian Boyle of the Rangers picked up his 3rd goal of the series and his second game winning goal. Boyle had a down year this season, only scoring 11 goals compared to 21 in the previous year. It seems he has found his scoring touch when it is needed most.

Game four saw yet another great game of up and down action between the two teams that ended up needing extra time to decide the winner. While the Rangers jumped out to a 2-0 start in the first period with goals scored by Anton Stralman and Ryan Callahan, the Senators netted two in the second to tie it up. Senators’ Milan Michalek and Sergei Gonchar picked up their first goals of the series. The third period saw no goals and only two penalties called, taking it into overtime. Shortly into extra time, Senators’ Kyle Turris came down the left boards, cradled the puck and released for a top right corner wrister. The shot was a beauty, tying the series and two a piece.

The next game to be played is Saturday night in New York. Both teams have played exceptionally well and the referees have given the boys room to play but have addressed any nonsense. Most of the headlines are following the Pittsburgh Penguins/ Philadelphia Flyers war on ice but are missing the great action this series has to offer. It is still uncertain who will win, both teams winning on the road and both teams fighting hard. Alfredsson is still up in the air on his return while Hagelin sits for one more game. The x-factor, King Henry, has yet again played solid in net. The series is a toss-up, but as a fan of good playoff hockey, I hope it can go seven games with a nail-biter at the end.