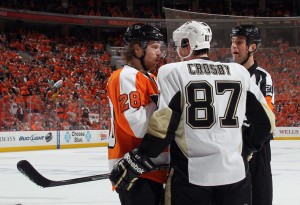 We here at Hockey World Blog, with the support of Dekree and Blue Ice Hockey, have put together a NHL Playoff Bracket Challenge. The challenge, predict the outcome of the NHL playoffs, round by round. With 58 participants, including HWB writers’, here are a few highlights:

The participants’ picks and statistics can be found here.

There are some of the statistics from HWB’s Playoff Bracket Challenge. Definitely interesting, considering how some of the matchups have gone to date. It seems many Pittsburgh Penguins’ fans are going to be a little unhappy if the Philadelphia Flyers seal the deal and upset the heavy favorite. The same goes for Vancouver Canucks fans if the Los Angeles Kings rain on their parade. Riots? Roberto Luongo trade? In looking at the statistics, what pops out to you?