I’m certain the readership, and the hockey world for that matter, are awaiting my 2012 NHL Playoff picks. Before diving right into it, I would like to remind everyone to participate in Hockey World Blog’s Playoff Bracket Challenge presented by Dekree and Blue Ice Hockey. It is free to enter and two winners will receive a top-of-the-line hockey stick. You can find more information here.

So, without further delay, here are my picks and my somewhat sound rationale.

Perhaps my hatred for the Canucks slightly skewed my decision. The Canucks have an overall excellent team, despite having players that whine, bite and flop like a fish out of water. I think the referees are going to be aware of that this year more than previous years and will put the whistles away and let the boys play. This should curb one of the leagues top powerplays. Further, the Kings have their star player Anze Kopitar in the lineup. For those who forgot, Kopitar broke his ankle just before the first round of the playoffs last year (ugly to watch). The Kings have a solid netminder in Jonathan 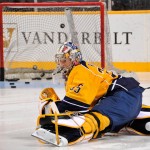 Quick as well as depth in Mike Richards, newly acquired Jeff Carter, Justin Williams, Drew Doughty and so on.

The Wings are my home team but not quite sure they have enough to take the Predators down. Detroit has looked good the last couple of games but have been snake bitten, hitting a lot of posts and such. The problem for the Wings this year, which is abnormal, is the defense and their untimely mistakes. The Predators on the other hand have the media behind them and a lot of bandwagon fans for that matter. Goalie Pekka Rinne is a monster,

newly acquired Alexander Radulov has transitioned well, and the team has solid depth both on defense and up front. The 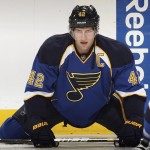 Predators are going to be able to knock around the feeble Wings without any backlash.

Captain Jonathan Toews is a game time decision for the Blackhawks. This, for Blackhawks fans, is a double edged sword. If he plays great, but at the same time, is he game speed ready? Netminding is shaky and the team lacks the depth to defeat those pesky Coyotes. Phoenix continues to go against the odds both on the ice and existing in Phoenix. Under appreciated Radim Vrbata netted 35 goals in 77 games, gritty Captain Shane Doan will lead them, and goalie Mike Smith is a rock in net.

Who would have thought the Sharks would have played so poor this year? Not many, that is for sure. Still, they made the playoffs going 7-3-0 in their last 10 games played. Can the momentum carry into the playoffs? Oh wait, who are they playing again? That’s right, out-of-nowhere St. Louis Blues. Sorry Sharks fans, the Blues are too dominant. Two netminders who have split time, both posting goals against averages under 2.00. That is just sick. David Backes continues to be a workhorse while the youth movement provides the untiring pressure. Injured players are now healthy and they are all lead by Head Coach Ken Hitchcock who has been to the Stanley Cup Playoffs nine times. Guidance, youth and depth equals a first round win. 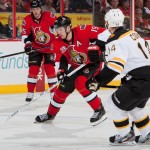 Seems like a lopsided contest, a number 1 seed versus a number 8 seed, but, that is hardly the case. The Senators have beat the Rangers three of the four meetings this season. Furthermore, the Senators have a healthy team. Their kryptonite might be their goaltending if Craig Anderson cannot get back to from after his culinary run-in. The Rangers are a good team lead by an idiot Head Coach in John Tortorella. I say it over and over, his antics distract the team. Until he is out of there, the team will not win a Stanley Cup ring.

What fan is not looking forward to this series? If there is one wish, all fans hope for a 7 game series full of yelling coaches, Hulk Hogan mockeries and good hockey. To be honest, this was a toss-up. I’m jumping on the bandwagon, that is not a bandwagon but more a reality, of the Penguins having whining babies. Plus, not a fan of Lemieux and his rants (glass houses, shouldn’t throw stones, you know). 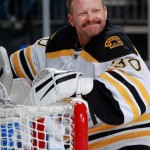 the Devils playing better as of late, they had the advantage.

The Capitals are a tease. They are high flying, defense lacking, Head Coach a swapping, but not going to go anywhere because they have too much of an ego. The Bruins on the other hand, besides Tim Thomas and his antics this year, is a tough nosed, hard working team. The Bruins will miss Nathan Horton who is out with an injury, but the team still has big Zdeno Chara, Thomas in net and a whole lot of depth up top. Tough to go back-to-back, but it does not look like they have any hangover.

Too much for the Bruins to handle after winning it last season. Plus, I’m a Western Conference fan and believer (unless Vancouver is in the Finals).

There are my first round selections. May agree, may disagree, that is what I am going with. My whole bracket is made out and can be seen if you participate in our free Playoff Bracket Challenge. Check it out, fill it out, trash talk my picks, the playoffs are here. Hooray!