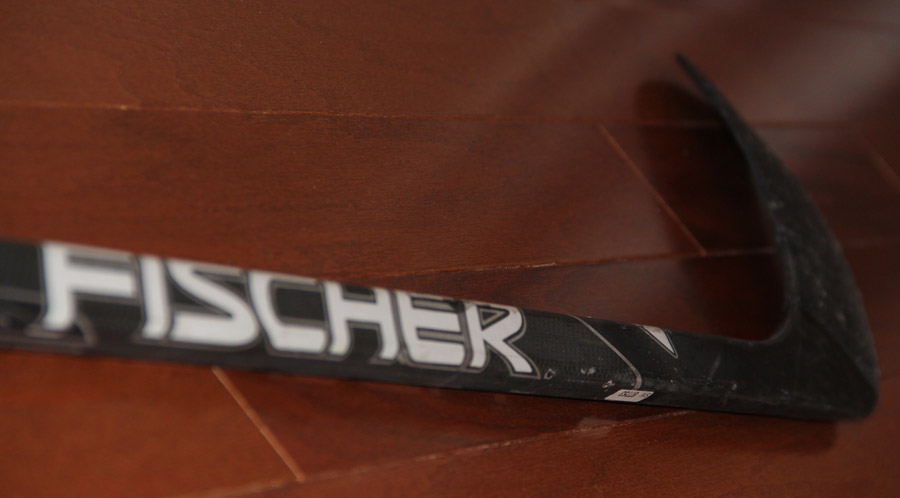 While Fischer doesn’t have a lengthy history in hockey in North America, they have been developing and producing hockey sticks exclusively in Europe since 1988. In fact, Fischer sticks can be found today in leagues across Europe such as the Swedish and Finnish Elite Leagues, the KHL, and Fischer is also a member of the IIHF as the official equipment supplier. They now hope the take their successful European reputation and quality and apply it to the North American market.

Thanks to the team at Fischer Hockey, we were given a Fischer SX7 stick to test, review, and compare to some of the offerings from other stick manufacturers. Read on for our initial impressions review of the Fischer SX7 hockey stick.

Appearance and Design: The Fischer SX7 is a slick looking stick, featuring a darker color scheme as the gray shaft fades into a black blade. The Fischer branding in white is written in a clean font on the lower portion of the shaft, while additional white accents and designs mark the rest of the shaft. The SX7 adds a bit of yellow color to an otherwise plain but nice looking color scheme.

The SX7 shaft is made with aircraft carbon material, while the blade is carbon and offers a PU core. These strong materials are used to provide great durability, and so far they have done their job. While the typical cuts and scratches exist throughout the lower portion of the shaft and into the blade, there are no serious signs of wear through about a month of usage.

Matte finishes have been a popular design trend in hockey sticks recently, and Fischer took note of that. The SX7 can be purchased in either a matte or grip finish, and our matte style is real nice. The finish, combined with the rounded corners of the shaft, allow the stick to move quite freely through your gloves. This can be frustrating to those players who don’t like a grip stick, but do need some tackiness. However, adding some additional tape to the shaft can help to solve that problem.

Balance: The Fischer SX7 stick is well balanced throughout and could be compared to other sticks hovering in the $199 price point range. Weight feels to be distributed evenly throughout the stick, being neither blade heavy or shaft heavy, but overall it does feel a bit heavier than today’s top of the line sticks such as the Stealth RS and Bauer APX.

Feel: Through roughly four or five games with the Fischer SX7, I have been pleased with the feel of the stick. Part is this equation is the feel of the puck on the blade. Thus far, I haven’t had many issues in either ice or roller hockey with puck feel. In my first skate, as I transitioned from an Easton RS to the Fischer SX7, I noticed myself on multiple occasions over-skating the puck while stickhandling. Since then, I’ve grown more comfortable with the stick and have gotten used to the different feel it does provide.

Likewise, the feel of the stick itself in your hands is something to get used to. As I mentioned above, the corners of the shaft are rounded. If you’re used to a Bauer stick with double concave edges, this shaft will feel odd at first. After a few skates, however, you will grow accustomed to the shape much like I did. 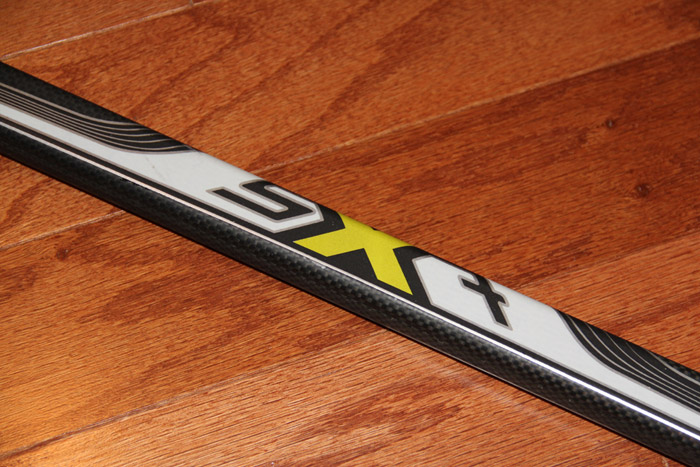 Shooting and Accuracy: After completing my baseline testing for accuracy a couple of weeks ago using an Easton SE16, Stealth RS, and Reebok AI9, I had a much better idea of what to expect when taking wrist shots and slap shots. So when I had the opportunity to test the SX7, I was disappointed to see that my accuracy numbers had dropped in both wristers and slap shots. Wrist shots seem to slide off my blade earlier than expected, resulting in shots that couldn’t hit my mark. Slap shots were no different as I failed to hit my spots on those as well.

However, the collect a pass in the slot than turn and shoot only tell half of the story. Despite my worse than average numbers in baseline testing, real game action has been a different story. In fact, I had a nice breakaway snipe in the top right corner last week with the SX7 that helped prove I could hit my marks on the move and in game situations.

As I’ve continued to test slapshots as well, I’ve been more and more pleased with my results. The whippy 90 flex shaft did not provide much pop at first, but shots have continued to get harder and faster as the stick breaks in. In fact, I was blasting some hard and accurate slapshots on Wednesday night which only helped to continue to restore my faith in its accuracy.

Overall Impressions: Despite some interesting experiences with poor initial accuracy testing, then better accuracy coming in real game situations, I’m pleased with what the Fischer SX7 has offered thus far. It’s got a good feel in your hands, and provides good feedback of the puck on your blade.

Coming in at only $199, the Fischer SX7 offers a good value for what you’re getting. Fischer definitely has some competition though, as many players will cough up the extra $30-50 for a top of the line stick from a well known brand instead of hunting down one of these. Beyond the big brands, they are going to face tough competition from other companies with mid-range offerings such as Miken and Dekree.

If you’re interested in purchasing a Fischer SX7, you’ll have to hang on tight until its official release in June, 2012. As I mentioned, the SX7 will set you back only $199, which is becoming a modest price these days for high-end sticks. Until it’s official release, you can learn more about the Fischer SX7 at Fischer-Hockey.com. When the stick is officially released, shoot me an email at matt@hockeyworldblog.com and I’ll help you find a local or online retailer carrying the SX7.

Let us know your thoughts on the Fischer SX7 hockey stick by leaving us a comment. Keep checking back to HockeyWorldBlog.com as we’ll be writing a longer term review of the SX7 as we get closer to the official release date.