Just like March Madness is in full swing for college basketball, the hockey-playing student athletes are gearing up for postseason play. This weekend teams will seal their fate as conference tournaments will take place across the country. The highest individual award in college hockey, the Hobey Baker Memorial Award, announced the ten semifinalists today. Represented are four forwards, four defensemen and two goalies. By class, there are five seniors, four juniors and one sophomore. The CCHA leads the way with three nominees, while Hockey East, ECAC, and WCHA each have two with Atlantic Hockey having one nominee. American’s lead the way with seven nominations along with three Canadians. Broken down by U.S. State or Canadian Province, Michigan, Minnesota and Ontario each have two in addition to Wisconsin, Maine, Texas and British Columbia each having one.

Next, the 23-member selection committee and an additional round of fan balloting (atwww.hobeybakeraward.com on Friday-March 25) will determine this year’s winner. Criteria for the award include displaying outstanding skills in all phases of the game, strength of character on and off the ice, sportsmanship and scholastic achievements.

The next key date in the Hobey Baker calendar is March 29 when the three Hobey Hat Trick finalists are announced. The winner will be announced April 6 at the 2012 NCAA Frozen Four in Tampa, Fla. Here’s a short description of each of the finalists.

Spencer Abbott, Maine forward– The senior from Ontario leads the nation in scoring with 59 points in 37 games on 20 goals and 39 assists. He led Hockey East in conference points with 41 in 30 games. He’s a key power play component for the Black Bears, who has one of the most prolific power play units in the country.

Jack Connolly, Minnesota-Duluth forward– The senior stayed in his hometown for college. He has not missed a game (161 games) in his college career. He’s right behind Abbott in the scoring race with 36 points. A returning Hobey Baker finalist for the defending national champions, Connolly has been held without a point in consecutive games twice in his career and had a team-record 22 game point streak in his career.

Brian Dumoulin, Boston College defenseman– A junior from Maine, Dumoulin is a defensive defenseman and is up for the Best Defensive Defenseman in Hockey East for the second-straight year. He won the award last year. Has a team-best +20 rating this season and carries a +83 rating for his career. His 22 points in 29 conference games leads Hockey East defensemen. 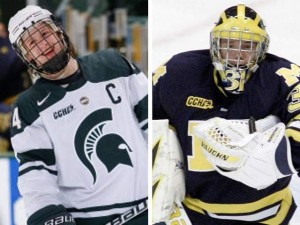 Krug (L) and Hunwick both are in the top 10 finalists for the Hobey Baker Award.

Troy Grosenick, Union goaltender– The lone sophomore finalist, the Wisconsin native has appeared in 28 of the Dutchman’s 36 games this season. He’s allowed two or less goals in 22 of those games, and sits third in the nation in both GAA and save percentage at 1.66 and .936 respectively. Has five shutouts this season.
Shawn Hunwick, Michigan goaltender– Stands small at 5-7, the senior from Michigan has played big for the Wolverines this season. At a school that has produced Marty Turco, Steve Shields and Al Montoya, Hunwick surpassed them all as the career leader in GAA and save percentage. His 23-10-3 record places him second in the nation in wins and carries a 1.96 GAA and .934 save percentage. He is sixth in the nation in minutes played.
Tim Kirby, Air Force defenseman– The only finalist at a school west of the Mississippi River, the senior from Minnesota already has a couple of awards this season as he won Atlantic Hockey’s Best Defenseman and Player of the Year awards.  Had a career-year this season with 12 goals and 25 points in 33 games. Six goals came on the power play and had three game-winning goals. At the Academy, he is his squadron’s safety officer and is on the commandant’s list for military excellence.
Torey Krug, Michigan State defenseman– A junior defenseman from Michigan, Krug has a unique distinction to be one of only five defenseman in college history who has led their league in points, he tied for first with 29 points in 28 CCHA games.  He averages 29 minutes a game and is a key on special teams. For the season, he has 12 goals and 21 assists for 33 points in 37 games – 7 power play goals and ranks third in the nation in points by a defenseman. He’s also a second year team captain.

Justin Schultz, Wisconsin defenseman– A junior from British Columbia, Schultz already has an impressive resume that includes being Hobey Baker finalist for the second straight season and leading the nation in defenseman scoring with 44 points in 37 games. For the second straight year, he’s won the WCHA Defensive Player of the Year honors, and posted back-to-back 40-point seasons. The second-round pick of Anaheim, he is the first Badger defenseman to lead the team in goals with 16.

Austin Smith, Colgate forward– The senior from Dallas is a fifth-round pick of his hometown team. The Texan has done his fair share of lamp lighting as he leads the nation in goals with 36 in 37 games. He has nine more goals than second place and leads the nation with six shorthanded goals. His five game-winners place him fifth in the nation and has recorded points in all but three games this season.

Reilly Smith, Miami forward– Smith is that player who is nine goals behind Austin Smith. The junior from Ontario has 27 goals this season and leads the nation in game-winning goals with eight. Just like Austin, Reilly is a draft pick of the Dallas Stars (third round) and led the CCHA in goals for the second-straight season. His nine power play goals places him sixth in the country and registered five points in two CCHA Quarterfinal games last weekend against Michigan State.