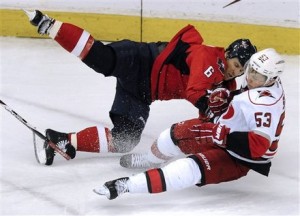 Carolina Hurricanes’ fans gave a collective sigh of relief last night as young forward Jeff Skinner has returned. Skinner, who has missed 16 games, was out because of a concussion.

The NHL continues its ongoing effort to curb head-shots, ultimately trying to remove concussions from the game. The charge to change the game for the better began last season as superstar Sidney Crosby of the Pittsburgh Penguins suffered a concussion, sidelining him for the last quarter of last season and out for the majority of this season.

Skinner’s return was a positive boost to the lineup of the Hurricanes as he continued where he left off. Playing two games so far, Skinner averaged 17:39 of ice time and picked up an assist in his second game. In time he will jump back up to his nearly 19 minutes a game norm.

Although Skinner’s return is a positive for the Hurricanes, the harsh reality is the team is in last place of the Eastern Conference. Last season the Hurricanes fell two points short of 8th place for the playoffs. This season the team will not make the playoffs even if a miracle happens. Very sad considering the team has such talent in Captain Eric Staal, Jussi Jokinen, Jeff Skinner, Joni Pitkanen and netminder Cam Ward. Major overhaul is in store for the team in the off-season, maybe even come trade deadline. From a fantasy perspective though, Skinner will still put up points to help out your team.