Taylor Hall, who has points in all but one games played in the new year, was forced to sit out last night’s game against the Columbus Blue Jackets after receiving a serious cut above his left eye during warm ups. In what can be described as nothing more than a freak accident, Hall stepped on a puck and lost his footing during warm ups and slid into Ladislav Smid, taking out his feet. Smid and Hall both crashed into the boards as teammate Corey Potter was swinging around. Potter attempted to leap over the crashing duo, but only caused more damage as his skate hit the head of Hall. Fortunately, Corey Potter managed to not hit Hall directly in the eye during the accident. The cut was severe enough, however, as Hall required 30 stitches to close the wound.

“This is one of those fluky things. It just happens, not much we can do about it.” Oilers head coach Tom Renney said of the injury to Hall.

An incident such as this, however rare and fluky it may be, should bring up the question of whether or not players should be required to wear helmets during warmups. Hall, who typically wears additional facial protection with a shield, could have walked away from this incident unharmed had he been wearing his typical game set-up. Instead, he was forced to be scratched from the game against Columbus which they eventually lost. Edmonton plays again tomorrow in St. Louis, and only time will tell if Hall will be ready to go. If not, a situation which could have been avoided with a helmet and shield leads to more missed games from star players and additional frustration for Oilers fans.

Check out the video of the incident below and sound off in the comments. Do you think this whole problem could have been avoided in any way?

Here’s a nice photo of the aftermath – Taylor Hall with 30 stitches on his forehead after being cut. 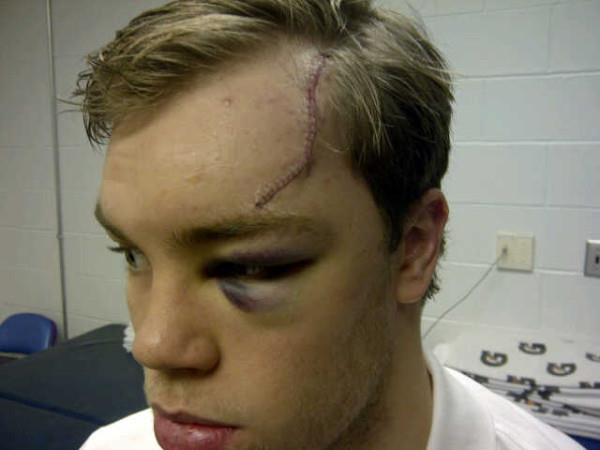 Taylor Hall after receiving 30 stitches in his head. Hall was cut by teammate Corey Potter's skate after a fluke accident during warmups.