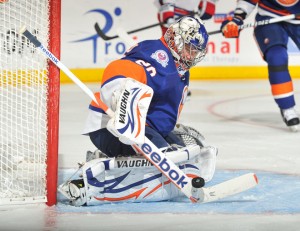 The 14th placed New York Islanders have activated goaltender Evgeni Nabokov off injured reserve. With very little fantasy owners owning him, he may be worth looking into for some depth.

The 36 year-old Nabokov began the season with a horrible 1-5-0 record in 8 games started. Of the time played, Nabokov has a rather high 2.83 goals against average and a .910 save percentage. So why in the world would any fantasy owner be interested in him?

Nabokov’s career has been played with the San Jose Sharks where he won the Calder Memorial Trophy for rookie of the year in 2000-2001. Since then, his stats have not been Patrick Roy like, but still a solid number one net-minder. In his 571 games played he has a winning record of 294-183-29-51 with a 2.39 goals against average and a .912 save percentage. Furthermore, his playoff stats have been 2 games over .500 with 40 wins and a 2.29 goals against average with a .913 save percentage.

OK, the stats have been pumped but why is Nabokov a potential steal in fantasy pools? Nabokov is a solid net-minder despite lacking a team in front of him with the New york Islanders. He may not get as many wins as some other goalies but he will definitely get a decent save percentage by facing an average of 31.1 shots per game (21st in the NHL). The Islanders are still young and developing, they can only get better as a team. The real possibility however comes in the possibility of a trade.

Last year Nabokov made headlines by being signed as a free agent by the Detroit Red Wings. However, due to his play oversees, Nabokov needed to clear waivers before re-entering the NHL. This is where the New York Islanders came to pick him up and tried to work out a trade. Nabokov on the other hand refused to play, eventually was suspended and sat out the remainder of the year. Well he is back, the Islanders still need a goaltender and the Red Wings may be willing to trade. Backup Ty Conklin has only seen 4 starts, a 1-3-0 record with a 3.26 goals against average. Ouch!

Conklin may not be a trade interest for the Islanders, however, the Red Wings do have 22 year-old Thomas McCollum. McCollum is young, currently playing in the ECHL with the Toledo Walleye. His stats are not quite there but the Red Wings have belief in his potential. Not needing a goalie for quite some time with 27 year-old Jimmy Howard, on top of possibly willing to trade winger Dan Cleary, the Red Wings may be interested in Nabokov once again.

Nabokov is not going anywhere for a while, not until he starts posting a few wins. Be on the lookout for buzz about a possible trade. Once that starts to hit the headlines Nabokov might be of interest.