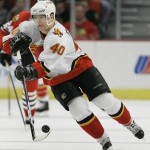 Look for Alex Tanguay to crack the 70-point plateau for Calgary this season.

Offense: The Flames got off to a poor start at the beginning of the season. The first half was deadful, they weren’t winning games and they weren’t scoring goals. They were able to find fire the second half where they averaged 3.42 goals per game over the final 47 games of the season. That was when GM Darryl Sutter was fired and Jay Feaster was brought in. Had they been scoring at that clip over the entire season, they would have led the league in scoring. They return every player from the top four lines, with the only addition being 26-year-old prospect Pierre-Luc Letourneau-Leblond.

While he isn’t new, the Flames return Daymond Langkow, who played four games last season when he suffered a neck injury and missed most of the season. He could be a fantasy sleeper as he didn’t play last season and could slip into a later round. Expect him to score between 30-35 points on the third line. Jarome Iginla and Alex Tanguay will be expected to carry most of the scoring load. The big question is how much will the captain have in the tank? His contract ends in two years, and expect him to look elsewhere for a championship should he not get back to the Stanley Cup final before 2013.

They don’t have  a lot of speed due to the aging vets on the forward lines but will be able to play an uptempo style with Curtis Glencross and Rene Bourque on the wing of the second and third line. X-factor players who we should see good things out of this season include Olli Jokinen, David Moss, and Mikael Backlund. In addition to Letourneau-Leblond, look for Paul Byron to have a chance to make the team and see playing time this season.

Defense: If there is anything that will keep the Flames from playing past April 7, it will be there defense. Because they traded away top defenseman Robyn Regehr, there are big shoes and a lot of playing time up for grabs in all three phases of the game. The top defender is now Jay Bouwmeester, but he hasn’t met expectations in regards to his offensive production. Having the ability to move the puck when the team plays an uptempo style is necessary and the offensive will be generated through Bouwmeester. Also look for contributions from newly promoted Mark Giordano, as well as Chris Butler and Anton Babchuk.

Keeping the other team from scoring will be key for the team, as they were fifth in goals against two years ago, but ballooned up to 19th last season.

Goaltending: Miikka Kiprusoff is the alpha and omega when it comes to goaltending for Calgary. Just like I wrote last season, they had to get him a quality backup. They have appeared to do that with Henrik Karlsson. Kipper played and started a post-lockout low 71 games last season but it isn’t much of a drop when he has played between 73 and 76 games since the lockout. They probably can’t afford to have him start between 69-70 games because the rest of the team isn’t strong but I would like to see that if possible. Karlsson is still young but expect him to get between 10-12 starts. Leyland Irving is penciled in as the third goalie should Kiprusoff or Karlsson suffer an injury.

HWB Playoff Prediction: Not playoff bound. They are essentially the same team as last year. Calgary wasn’t able to bring in any additional talent because they have pretty much spent at the ceiling since the lockout. The bad part is they have spent it on bad contracts and it has taken this long for Feaster to manage it properly to have the space to add players. Should Calgary be in the playoff chase come the trade deadline, expect them to be a buyer.