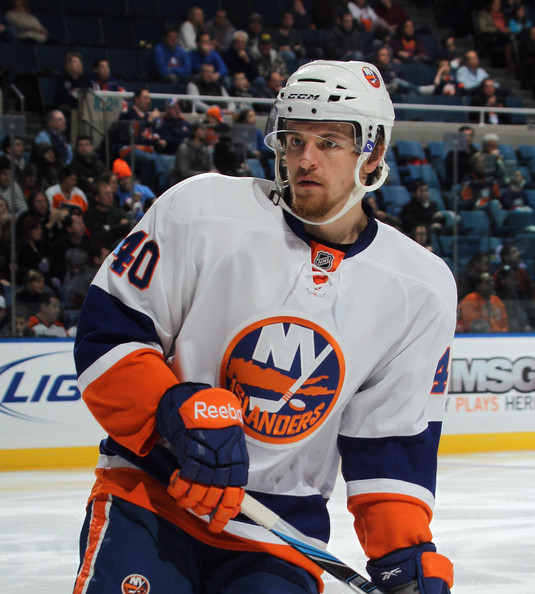 The Islanders hope Michael Grabner can build off of his succesful 2010-11 season.

Offense: The Islanders have a solid group of young players, lead by John Tavares who began to really pile on the points during his sophomore season. Tavares will try to improve upon his 67 point campaign while surrounded by the likes of PA Parenteau, Matt Moulson, Michael Grabner, and Blake Comeau. These players are not quite household names yet, but they are good young players who have a lot of potential. Adding Brian Rolston to the mix gives the forward unit a man with much more experience and great leadership qualities.

Moulson, who put together a surprise season in 2009-10 with 48 points, improved on that number last season. His 31 goals and 22 assists were both career highs, and he will be expected to continue that improvement for the Islanders this season. Michael Grabner will be an important piece to the offensive puzzle as well. Grabner lead the Islanders in goals last season as a rookie, with 34, and had 18 assists to go along with it. On a team full of minus players, his team leading plus-13 shows he is an all around player, and important to the success of the franchise.

The health of Kyle Okposo will be a bonus to the orange and blue. Okposo missed the first half of last season after having shoulder surgery to repair a torn labrum. He returned to have a modest 20 points in 38 games, but will be counted on to contribute upwards of 50 points this season.

The Islanders could see Nino Niederreiter return for an extended stay in 2011-12 and make the team right out of training camp. The fifth overall pick from 2010 played in only nine NHL games last season, picking up a goal and an assist. Playing full time with the Portland Winterhawks of the WHL, Niederreiter tallied 70 points on 41 goals and 29 assists. When he finally makes the transition, expect his numbers to be consistent with the guys mentioned above. He’s a skilled young player, as you can tell from videos like this, and will fit in nicely playing alongside a young, talented Islanders team.

Defense: The return of Mark Streit, who missed all of last season with a shoulder injury, will be huge for the Islanders defense. He typically hovers in the 50 point range, but more importantly, he can effectively captain and lead the power-play unit to much more success. The loss of James Wisniewski at the trade deadline last season will continue to haunt the Islanders blue line, however. Their defensive units, besides Streit, will be young and inexperienced. The young theme is constant throughout the squad, and on defense, it’s going to hurt more than it will help this year.

Goaltending: The goaltending situation for the Islanders continues to be a question mark. Last season, a total of six goalies started games, with the majority going to Rick DiPietro, Dwayne Roloson, and Al Montoya. Roloson has moved on to bigger and better things, but DiPietro continues to work his way through a lengthy contract. The addition of Evgeni Nabakov never panned out last season, but he is supposedly ready to give it his all in New York this season. Much of the work will likely fall in Nabakov’s lap as DiPietro has not played a healthy season since 2007-08. Regardless of who is net, however, the young squad will make some mistakes that even the best goalie will not be able to recover from. Nabakov, a steady regular season goaltender, will likely bring a solid game to help the Islanders squeeze a point or two out of some close games.

HWB Playoff Prediction: Not playoff bound. Despite having a young group of talented forwards, there is still a lot of work to be done on Long Island. Expect a season long performance much like last seasons.