This fall, along with the new Easton Stealth RS, we will also be seeing the release of the Easton Stealth 65S hockey stick from the team over at Easton Hockey. The new Stealth 65S is being marketed as “the shooter’s stick.” This lower price point stick will be made with a combination of carbon and kevlar, and will feature an ultra thin taper profile for those quick shot releases. Easton will be sticking with the matte finish on the Stealth 65S hockey stick, and offer both a grip and clear coating for the shaft.

The Stealth 65S stick will be available in senior, intermediate and junior sizes. The senior will only be available with 100 and 85 flexes initially, and come with the choice of an Iginla, Hall, or Cammalleri blade pattern. The new Cammalleri pattern will be the new name for the widely popular Zetterberg pattern, which has previously been named after Modano and Forsberg.

Easton has done an incredible job on the looks of their new Stealth sticks. The Easton Stealth 65S stick will be mostly grey, black and red, giving it a real stealthy look which they are obviously known for. The matte finish seems to be gaining popularity among stick manufacturers, as well as consumers. Coming in at a lower price point, only $99, the Stealth 65S stick could be a real great pick-up for the recreation and beer league player. Even more competitive players will begin to notice that now even less expensive composite sticks can give them the performance benefits they seek out of a top end stick. The most noticeable difference will be weight, but once you can get past that, you should be pleased with what they have to offer.

For those interested in the new Easton Stealth 65S, you will not have to wait much longer. You can expect Pure Hockey, along with other retailers, to have the new twig in stock on November 15th!

Take a look at the new Stealth 65S stick below and let us know what you think. 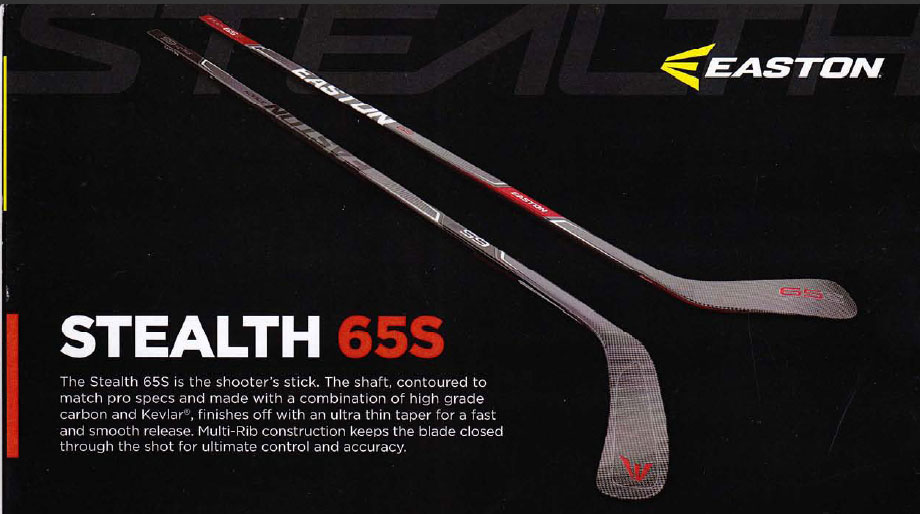