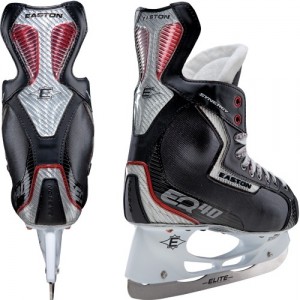 In recent months, the four of us have been on equipment purchasing binges. Various equipment we have purchased and reviewed include skates, sticks, gloves, and goalie masks. The latest piece of gear that I needed to upgrade was my ice hockey skates. I primarily use my skates for officiating. This fall will be my 12th season as a USA Hockey official. I spent a lot of time on the ice and an upgrade to lighter, more durable skates was much needed. When I started officiating in 2000, I was only 14 years old. And because I (and my parents) didn’t know how seriously or how long I would be officiating, we didn’t spend too much money on a pair or skates as I was a goalie and most of the money towards new gear went towards that.

The skates I have been using the past 11 seasons were the Bauer Impact 75. I decided to part ways with those because they lacked protection around the ankle and were beginning to become too small for me. When I researched skates to buy for potential review on the site, I was first attracted to Bauer skates because that is what I have used for almost my entire hockey career. At The Bauer Experience I had the opportunity to skate in the Bauer Supreme line. I wanted to try the Vapor line, but because I was born with big feet (I wear a size 13 shoe), they didn’t have skates larger than size 10. However, I did get my wish and purchased a pair of Bauer Vapor RX:20 inline skates.

While researching, I was undecided between Reebok and Easton for skates. The main thing that turned me off to Reebok 10K was the massive white Reebok logo on a pair of black skates. And the Easton EQ40 is one of the most comfortable skates I have ever tried on in-store.

When I purchased the skates from Ice Warehouse, they were in such demand the skates in my size (10.5 D) were back ordered for two weeks. Most people would be upset at this, but I actually thought it was a good thing because it must be a popular item. When I got my hands on them, I was very impressed with the look and feel of them. Aesthetically, it is very good looking: a black boot with accents of grey and some red trim. As an official, you want to draw as little attention to your appearance as possible. That is why you’ll never see an official with white skates or even worse yellow laces.

In addition to the sleek look, the boot is very hard and sturdy on the outside. I don’t think you will need the popular Skate Fender which is the new rage among NHL players. Most old-school skates used to have the Kevlar toe, which would wear down over time. This one has a hard plastic toe cap, which can decrease wear and  injuries from hard shots. One feature I love is the white felt tongue. It is firm but flexible and has lace-bite protection. It’s flexible enough to where I am able to bend at the ankle and not feel the stiffness of the toe trying to keep it up. After comparison with Chris and his Bauer Vapor skates, this is one that made me glad I went with Easton. The skates are also heat mold-able and can be baked to decrease break-in time after purchase.

One unique feature I haven’t seen anywhere else is their Dry-Flow ventilation. It has an aerodynamic vent at the bottom of the skate which releases the moisture and excess heat created during play. Skates will stay lighter, stiffer and drier during and after games. Perfect for me in which there could be says where I am officiating five games in 3-4 different rinks.

As for the blade holder and runner, it has the Razor Bladz II holder- A revolutionary blade system which allows the steel to arc during turns, resulting in faster, sharper, explosive turns. The Elite Runners are high-end stainless steel design with a power tab in the middle of the blade for enhanced stiffness and energy return.

It has very similar features to the top skate in the Easton line, the EQ50. If you are looking for a near-top of the line skate without wanting to pay top of the line prices, the EQ40 is the skate for you. They can be found at Ice Warehouse for $349.99. Most D-Width sizes below 10.5 are in stock as of July 1. They also available in EE-Width as well.

Check the site in the coming months for more reviews on the Easton EQ40 skate as I continue to use it on the ice.