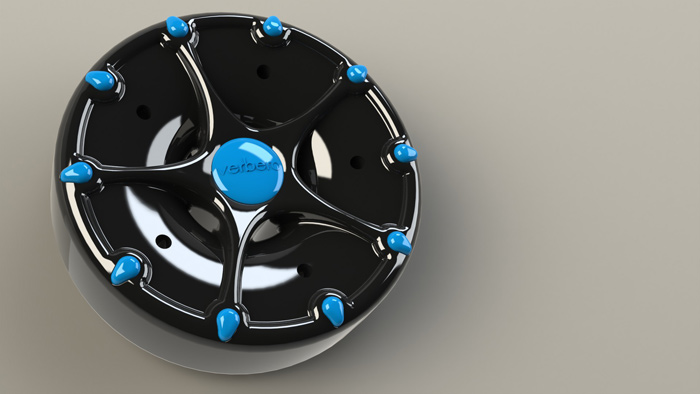 Recently we were given an Aero Puck from Verbero Sports to put through our review process. We’ve skated with the puck for quite some time now, and really love what it has to offer.

Pro: Quick moving, good weight, great colors
Con: Not widely available yet
To the Point: This is the next great inline puck, and will be a better alternative to the Rocket Puck and IDS puck

If you’re an inline hockey player looking for a new product with great features, don’t skip over the Aero Puck from Verbero Sports. We’ve used just about every inline puck on the market, and none have impressed us as much as the Aero Puck. One of the first things you will notice is how great the puck slides on a sport court surface. Despite having smaller pegs, and a ten peg system (rather than the eight featured on an IDS), the Aero Puck slides a bit more like you would expect a puck to slide on ice. Don’t worry if you have quick hands because the quick glide will allow it to easily keep up with you. In fact, when we directly compared the Aero and IDS pucks on a tile surface, the Aero Puck not only moved quicker, but it slid further as well. This will prove to be a great benefit when making those long range passes to a teammate.

In terms of overall size and shape, the Aero puck is just what you would expect. It has roughly the same dimensions as an IDS puck, and feels a bit heavier on your blade. Now some people might prefer a lighter roller hockey puck, but the weight on this one felt ideal to us. Shots came off our blades heavy and hard, while saucer passes with some touch soared across the rink just as you would expect them too.

When you take a look at the design, you’ll notice the Aero Puck looks a lot different than your typical roller hockey puck, but in a great way. The star-type design in the center gives it a fresh look, while the weight in the center helps keep that great balance. The intuitive design also helps to keep the puck gliding on the rink, rather than bouncing or rolling around like you might be accustomed to playing inline hockey.

From our extensive use with the Aero Puck, we noticed it had great durability. We drilled shot after shot off the posts, crossbars, boards and glass without damaging the puck whatsoever. The gliders show signs of wear at this point, but nothing that is overly concerning. The speed of the puck has remained quite consistent, and that does not seem like it will change.

Overall, the new Aero Puck from Verbero Sports is a tremendous product. We were impressed with everything about the puck, from simple elements like design, to the parts that really matter like performance and durability. Verbero Sports is a relatively new company, but if their future products are as strong in all the key areas as their Aero Puck, they will be a major player in the roller hockey industry.

If you want to pick up one of these great pucks, head over to Inline Warehouse. You can pick up the Verbero Aero puck for $6.49 a piece, or $5.99 each if you buy 5 or more pucks.