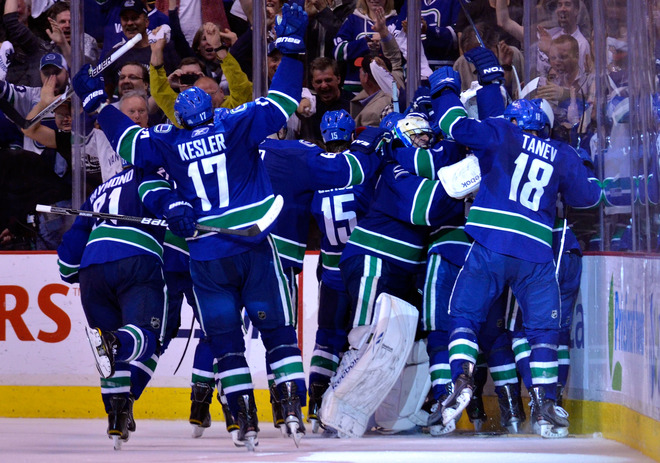 Vancouver vs. San Jose – Thanks to a fortunate bounce for the Vancouver Canucks, they are headed to the Stanley Cup Finals for the first time since 1994. Kevin Bieksa scored the game winning goal for the Canucks in double overtime after the puck took an odd bounce off the glass. Sharks players had no idea where the puck was at, as it bounced straight to Bieksa. He fired a shot from the point which easily beat a clueless Antti Niemi, and the celebrations in Vancouver began.

Alexandre Burrows started the scoring for Vancouver midway through the first period. That goal was his seventh of the post-season, and was assisted by Henrik and Daniel Sedin. Patrick Marleau evened things up midway through the second on a power-play goal. Despite not showing up until game seven of the Detroit series, Marleau tallied points in each game against Vancouver, including five goals.

Just twenty-four seconds into the third period, Devin Setoguchi scored his first goal of the conference finals to give the Sharks a 2-1 lead. Vancouver waited until the last minute, but managed to tie the game with fourteen seconds left when Ryan Kesler redirected a point shot past Niemi. The goal was Kesler’s seventh of the post-season, and now gives him goals in back-to-back games and 18 post-season points.

The overtime periods were controlled mostly by the Sharks, and they outshot Vancouver 16-9 in that time. However, Vancouver got the one that counted as the Bieksa winner came at 10:18 of the double overtime period.

Roberto Luongo played out of his mind in net, and had one of his best games of the post-season making 54 saves. Both Sedins continued to shine in this series, Henrik had two assists in the final game and Daniel had one assist. Henrik Sedin now leads all playoff scorers with 21 points (2 goals and 19 assists).

Vancouver will now go on to face the winner of the Boston/Tampa Bay series, which Boston currently leads 3-2. Regardless of who advances, you have to like Vancouver’s chances in the finals. The Sedin twins will be hard to stop, and if you manage to, Ryan Kesler will be there to make you pay. After a rough start against Chicago, this team has really found their stride.