Our friends at BattleAxe Hockey has provided another stick for us to review. Earlier in 2011 we had the opportunity to review the BX10 stick. I have the opportunity to use the BX7 stick for a few games of my inline hockey season. My early impressions of the stick is quite positive. The BX7 stick is the same one the Hockey World Blog and BattleAxe Hockey gave away during a contest in April.

When someone looks at a stick for the first time, they notice the graphics. I like the simple yet great look of the BattleAxe sticks. One good thing about their sticks is that each model has a different colors yet keeps the same overall design. The BX7 has a red shaft while the blade and butt end is in black.

As someone who previously played the 590-gram Warrior Bentley stick, the BX7 is the lightest stick I have ever used at 515 grams. I know there are lighter sticks out there, but if you think most sticks made by the big named manufacturers are too light this stick is good for you. The BX7 (as well as other BattleAxe sticks) have a grip finish. I have never played a stick with the grip finish, and I can tell a big difference with my right hand being positioned down the shaft. The gripped area of the shaft extends for 24 inches.

In playing a couple games with it, I have seen good results with it. The stick I have is of the P29 pattern. The P29 pattern has a mid curve, deep curve depth and rounded toe. It also features 5.5 lie angle, open face angle and 1/2″ curve size. The flex is 105, which is very solid for the type of shots I need on the rink. I spend the majority of my time at defense along with some shifts up at forward. I can get a wrist or snap shot off quickly while my slap shots are hard and below the crossbar.

Of the four of us here at Hockey World Blog, the stick out of the box was the best suited for me because I am the tallest at 6’1″. The stick comes right to the tip of my nose in regular shoes, which has always been the traditional ideal length of a hockey stick. It is 1.5″ longer than my Bentley stick, which it meant it took some to get adjusted to playing a longer stick. The longer stick is ideal for when I play defense for the extra reach but I found myself choking up on it while skating to the rink on a rush for extra torque and control. I commend BattleAxe for making a slightly longer stick for us taller players so we don’t have to buy a plug extension to make it longer.

If you have any questions for us regarding the BattleAxe BX7, please feel free to ask. We’re going to beat this thing up a little bit, putting it through usage both inline and on ice. We will also let you all know how it performs on the rink. Look for our full review on the BattleAxe BX7 in the coming weeks. For more information, as well as other features and specifications of the stick, visit the BX7 stick page. They can also be found on Facebook. 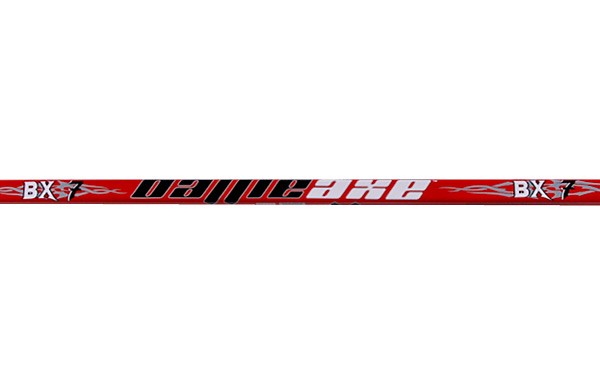