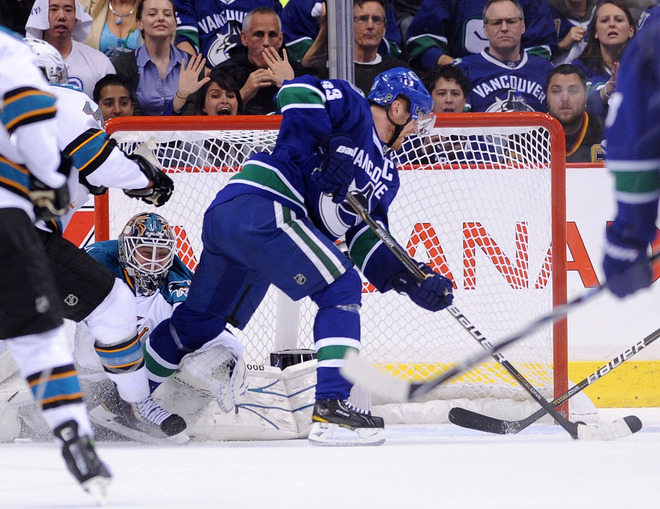 Vancouver vs. San Jose – We have every right to believe this series will be a great one. In the quarterfinals, Vancouver gives up the early 3-0 series lead, while San Jose follows it up by falling apart in the semifinals. Both teams bounced back and squeezed by their opponents in game seven. But now, as Vancouver and San Jose battle in the conference finals, who can we expect to escape with victory?

In the first period of game one, we saw chances go both ways. It wasn’t until late in the first, however, that Joe Thornton gave the Sharks a 1-0 lead. The goal came after a terrible play by Roberta Luongo. After picking up the puck behind the net, Luongo attempted the clearing pass to Henrik Sedin. Unfortunately, the Canucks netminder ended up sliding the puck straight to Thornton, who had a wide open net to shoot at. In a series that looks to be real close, giving up terrible goals like that will really hurt you.

Early in the second, we saw the Canucks rebound with a goal of their own when Maxim Lapierre scored off a nice feed from Jannik Hansen. Nearing the midway point of the game, a “gutless” Patrick Marleau scored his second goal in as many games, this time on the power-play, to give the Sharks a 2-1 lead. The goal came at 8:44 of the second, as Marleau redirected a point shot from Dan Boyle. The Canucks out-shot San Jose 25-22 after two periods.

San Jose continued their third period struggles, as Vancouver’s Kevin Bieksa tied the game 2-2 at 7:02 of the third. The Bieksa goal came on a nice wrist-shot from the right circle that went far side over the blocker of Antti Niemi. Just over a minute later, on the power-play, Henrik Sedin would tally to give the Canucks a 3-2 lead. Sedin collected a nice pass from Christian Ehrhoff, dipsy-doodled around Niemi, and slid the puck into a wide open net. That would be all the Canucks needed to take a 1-0 series lead. They out-shot San Jose again in the third, this time 13-7, and 38-29 throughout the game.

Roberto Loungo rebounded nicely after his terrible giveaway in the first period. A play like that could really set the tone for the series, but he quickly shook it off and played an excellent game. He has done real well in his return to net following the pull in the Chicago series.

Ryan Kesler was quiet in game one, after having a ridiculous series against Nashville. He did pick up the second assist on the Sedin goal, but still was not quite as effective as he had been. Luckily for Vancouver, the depth scoring proved potent enough to steal a victory.

San Jose, on the other hand, did not find the depth scoring which they had during the Detroit series. Devin Setoguchi was quiet in game one, despite scoring five goals in seven games in the semis. Dany Heatley and Ryane Clowe were left off the scoresheet as well. They’ll have to start contributing again for San Jose to have a chance.

Antti Niemi continues to be the strongest of Sharks players. He was in the same situation only a year ago, and proved he had what it takes to win a Stanley Cup. I have continued to doubt him, and said it was merely a matter of the Red Wings making another goalie appear better than they are as they fire off several garbage shots right into his chest, or miss wide open nets. Niemi continues to prove me wrong, however, as he is consistently in the right place at the right time, and making big saves to keep the Sharks in close games. We’ll see if he has what it takes to fend off the Canucks offense, but it’s easy to say that San Jose would not be where they are without him.