Update: Grab the Easton Stealth S19 Pure hockey stick exclusively at Pure Hockey. The S19 Pure is selling for $239.99 and you can grab one here. Don’t forget to use the coupon code “hockeyworld” to save 10% on select products!

If any of you watched the Ottawa Senators before their season ended, and more specifically Jason Spezza, you would have noticed that he has been using a new stick. The all white Easton stick is being called the Easton Stealth S19 Pure, according to Easton Hockey on their Twitter page.

We’re not exactly sure what differences there are between this S19 Pure and the traditional black S19, if any, but we can tell you it looks great! Easton Hockey has made some great progress recently with their EQ50 skates which have gathered good reviews, and the unreleased Stealth RS that is being used by a number of NHL players now.

What do you think of the new Stealth S19 Pure? 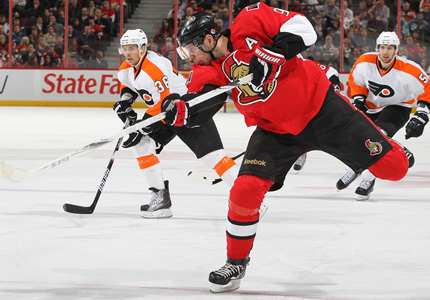