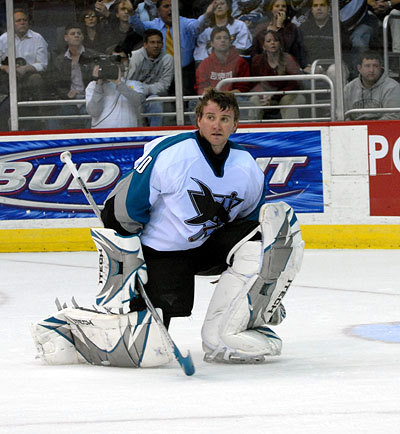 Will Evgeni Nabokov be wearing the winged wheel by this weekend?

In a deal that is sure to shock everyone in Hockey Town and the hockey world, it appears as though Evgeni Nabokov is close to signing a deal with the Detroit Red Wings.

Nabokov, the former San Jose Shark, became a free agent after the Sharks decided not to offer him a new contract. Seeking more money than any NHL team was willing to commit for a goaltender, Nabokov left the NHL to head back to his native Russia, signing a deal to play with SKA St. Petersburg of the KHL.

In Russia, Nabokov suffered a fate all too familiar to his playoff appearances with the Sharks. His stats were nothing remarkable, his play mediocre at best, and he was eventually released in December, 2010. It was noted that his release was a mutual agreement with management and rumors suggest it may have had something to do with his family not being able to adjust to the new living situation.

The Red Wings would greatly benefit from the signing, as their injury troubles continue. Chris Osgood is out at least six weeks after having surgery to repair a sports hernia, and Jimmy Howard was recently hurt after taking a shot off the knee. Even Grand Rapids Griffins goalie Thomas McCollum injured a finger after being called up by the Wings. Howard is expected back tonight against the Blues, but signing Nabokov would provide great insurance in case of future injury.

In order to join the Red Wings, and the NHL, Nabokov must first clear waivers.