Last week, the team over at Battleaxe Hockey were kind enough to send one of their Battleaxe BX10 sticks our way to do a long term review. We received the stick on Christmas Eve, and were able to take it out to use for the first time on December 26th. 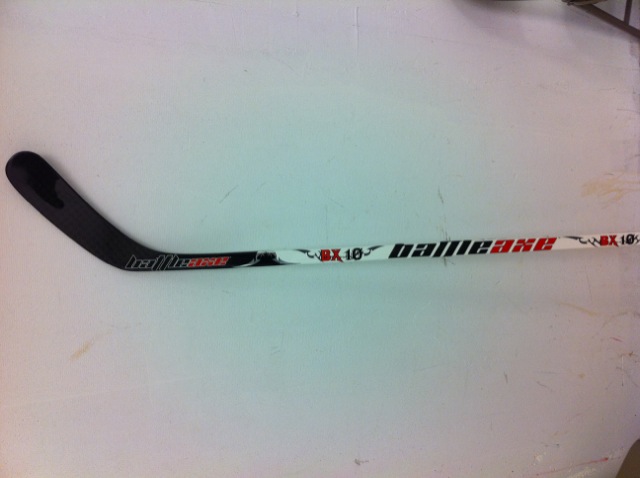 Battleaxe Hockey, for those of you who don’t know, is a smaller gear company trying to make an impact for the hockey player where it might matter the most – their wallet. The equipment they make is more affordable, and more durable, which means any competitive or rec league player can use high quality equipment and not go broke in doing so. In fact, the BX10 that we’re testing up against sticks like a Bauer One95 and Easton S17 can currently be found on sale for $159.99.

We also really respect what Battleaxe has done across their entire lineup of sticks. They don’t just include their best technology in their top stick (the BX12), they actually implement at least 80% of their top technology in every stick they produce, no matter what the price point is.

Now, I don’t want this to sound like a sales pitch, so enough about the company, let’s talk about our review process and initial impressions with the stick. First, we’re getting two BX10 sticks, one new (which arrived on the 24th) and one used. Battleaxe claimed that they could send us a used stick and we’d still be impressed, so we wanted to take them up on that. We’ll face the sticks off against each other, against other top end sticks, lower end sticks, and get feedback from a variety of players, including veterans of the game, and those with only a year or two under their belt. Finally, we’ll share everything with you, the reader. So please, if you have any questions about these sticks, let us know and we’ll answer them for you.

As I said, the new stick came December 24th and immediately after taking the bubble wrap off, the first thing I noticed was how light it was. It’s listed at 455 grams, heavier than my One95, but felt lighter in my hands. We all concluded as well that the stick was very busy in terms of graphics. It’s not Warrior busy, since it doesn’t use the bright colors, but it still has a lot going on.

After taping up the stick and heading out on to the rink, I was impressed right away. We were skating inline, and the feel I got for the roller hockey puck was incredible. I would certainly say it was better than my One95. Handling the puck seemed about as effortless as it could be, while my hands seemed faster as well. That could have just been the excitement of getting out on to the rink with a new twig, but like I said, the BX10 felt lighter to me.

Shooting and passing seemed nice as well. I think its always a good sign when the first in-game shot you take with a stick is a goal, and that’s exactly what happened with this guy. While to me, all my passes seemed crisp and tape-to-tape, we’ll have to let Chris, EB, or Eddie chime in on that. Accuracy, overall, I thought was good, especially when I sniped my goalie going high glove side while we messed around. I was using essentially the same curve I’ve used the past five or so years (Modano/Forsberg), and it delivered just as expected. The 105 flex essentially made no difference compared to the 100 on my One95. 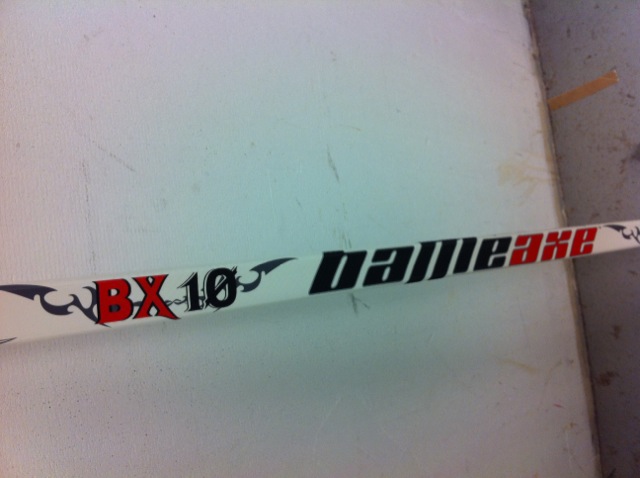 After taking some time myself with the stick, I passed it around to some of the other guys at our skate, including the guys here at HWB. Everyone out there had nothing but good things to say. Anything bad I heard was about the stick related to player preferences, such as stick length, flex, or even tape job. Oddly enough, I think the biggest complaint was the tape job that I had initially. I guess the guys don’t like the way I tape my sticks.

As soon as we get our used version, we’ll take that out on to the rink and do some comparisons. We’re going long term on this review, so they will take a beating and we’ll let you know how they stand up to the challenge. Additionally, our games start up again on January 2nd, so you can bet we’ll be putting the sticks through everything. Like I said before, post any questions you might have, and we’ll answer them as soon as we can.

For more information on Battleaxe, head over to their site at BattleaxeHockey.com. Check out their contact page to order any one of their sticks.