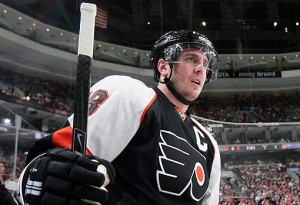 Captain Mike Richards should lead the Flyers to another productive season, possibly even the Stanley Cup.

Offense: The Flyers are coming into their own as a team offensively lead by a very physical and talented Captain Mike Richards. Richards has a supporting cast of Jeff Carter, Danny Briere, Claude Giroux and Scottie Hartnell. Sure it seems I’m just listing the whole team, but when you really look at the production of all these players, all 40+ point players, the team has 3 solid lines. Throw into the mix playoff stud Ville Leino and young gun James van Riemsdyk, it is very possible that the Flyers are capable of making another push for the Cup.

Philadelphia had a tough decision to make in the offseason and ended up trading away Simon Gagne. Gagne posted 40 points in 58 games played last year. To ease the pain of his loss, the team acquired a personal favorite player of mine in forward Nikolai Zherdev. Zherdev took a season off and played overseas with the KHL and did not put up great numbers. Perhaps he viewed it as a vacation as in his last two NHL seasons he had near 60 point seasons.

Defense: What’s not to love about the Flyer’s defense? They have grit, size and skill. Lead by veterans Chris Pronger and Kimmo Timonen, the defense will once again be solid.  Second pairings should note the production Matt Carle who had 6 goals, 29 assists and a +19 rating. The team also picked up Andrej Meszaros from the Tampa Bay Lightning to add to their depth and line the 3rd pairing. Meszaros could sink or swim as with Tampa Bay he was mediocre at best, but while previous to them with the Ottawa Senators, Meszaros had 3 seasons of near 30 points each season.

The only other note in regards to the worry of Pronger resting for the start of the season recovering from surgery will not be a factor as he should be prime come later in the season.

Goaltending: Last year Philadelphia had some goalie problems, problems to the extent of starting 4 different goalies throughout the season problems. All that should be behind them as the team should split time between Michael Leighton and Brian Boucher. Leighton was by far the better goalie of the two producing a .920 save percentage with a 16-5-2 record. Boucher still was not bad in the save percentage category, .900, yet when it came to his record, it was a mere 9-18-3.

Season Outlook: The Flyers almost did not make the playoffs last season, but once they did, almost won the Cup but lost to a better team in Chicago. This year expect another stellar performance from the Bullies and a drive like none other after the sour taste from losing after being so close. The addition of Zherdev should prove fruitful for the organization, and with the team mainly being players in their prime, Philly will be tough to beat this season.