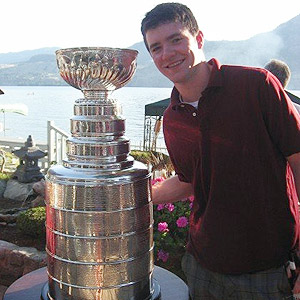 The Stanley Cup will ride in it’s first ever gay themed event at Chicago’s Gay Pride Parade. The Chicago Gay Hockey Association extended an invite to the Chicago Blackhawks and the team gladly accepted.

The Cup will be accompanied by defense-man Brent Sopel of the Blackhawks now Atlanta Thrasher along with his wife. Sopel, once playing under General Manager Brian Burke, wishes to pay tribute to Burke’s son Brendan whom lost his life in a car accident earlier this year.

Brendan Burke was a recently open gay male before he lost his life to a tragic accident. In a time where gay rights are still not on par to those of heterosexuals, it is important for sports teams to lead the way and show their appreciation of their fans, regardless of sexual orientation. Hopefully events such as these can assist in paving the way for an equal and better world.

The Chicago Cubs also will be present at the parade, sporting a vehicle decorated in brick and ivy design reminiscent of the classic Wrigley Field outfield wall.