Reports circulating around the internet claim that Finnish center Olli Jokinen is close to signing a deal with Dinamo Minsk of the Kontinental Hockey League. While Dinamo Minsk is yet to comment on the situation, Jokinen’s agent, Todd Diamond, vehemently denied rumors that his client is close to signing with the Russian club and stated that his client will play in the NHL next season. 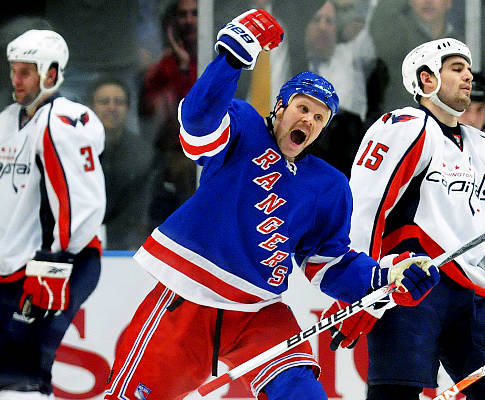 The 31-year-old Jokinen (left) last played for the New York Rangers after being traded at the trade deadline from the Calgary Flames. Jokinen is set to become an unrestricted free agent on July 1 and there seem to be no intentions from the Rangers to resign Jokinen.

Between 2005 and 2008, as captain of the Florida Panthers, Jokinen was one of the best players in the NHL scoring 30 or more goals for three straight seasons and racking up a total of 251 points in 246 regular season games during that three-year span. Jokinen was also one of the healthiest players as he played in all 82 regular season games for the Panthers in each of those three seasons. However, Jokinen’s production quickly diminished over the subsequent seasons since signing as a free agent with the Phoenix Coyotes prior to the start of the 2008-09 season. During that season, Jokinen chipped in 42 points before being traded at the trade deadline to the Calgary Flames where he tallied an additional 21 points. During this past season, split between the Flames and Rangers, Jokinen only managed 15 goals and 50 points in 82 games.

Rumors of a deal with the KHL should come as no surprise to hockey fans. In recent years, KHL teams have thrown tons of money at average level NHL players in order to steal them away from the NHL. Alexander Radulov and Jiri Hudler are two prime examples of this. If Jokinen stays in the NHL, he will undoubtedly see a significant pay decrease from the $5.5 million he was making previously because of the diminished quality of play he has exhibited over the last few seasons. With his current level of play, Jokinen could probably get somewhere between $2-3 million, depending on the team. However, if Jokinen decides to sign with Dinamo Minsk, he undoubtedly will get much more money from them then he would if he stayed in the NHL.