Matt Cooke and the Boston Bruins 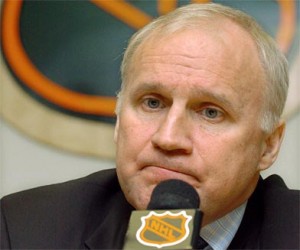 Colin Campbell looks stumped, just as Boston and NHL fans are about the non-disciplinary action against Matt Cooke and his head shot to Bruin's Marc Savard.

The last time the two teams met, Cooke blindsided center Marc Savard which resulted in a serious injury. However, no suspension nor any disciplinary action has been taken against Cooke.

Many fans, especially those of Boston, and players themselves, are unhappy with the NHL’s handling of the incident. Previously in the season, Philadelphia Flyer’s captain Mike Richards blind-sided and injured Florida Panther’s David Booth. The hit also left an injury, and set precedent to the current Cooke hit, that being no suspension.

How could this be?

The league has met and spoken since then, and next year hope to implement a new rule change that would ban blind-side hits in the NHL. Still though, it seems this season has no real discipline for the reckless and dangerous incidents.

Tonight, the NHL’s sole disciplinarian, VP of Hockey Operations Colin Campbell, will be in attendance at the game to monitor any possible retaliation. Expect the building to erupt with loud boo’s and negative chants of, “Campbell sucks”, or something of the like. When asked by a local news source if Campbell is expected to speak with the team before hand, Bruin’s forward Mark Recchi responded, “No, we don’t want him in our room.”

Some believe the game tonight will be nothing more than a normal game with  Campbell’s presence being a deterrence to any rough stuff. Others, like myself, feel there will be a good ‘ol fashion hockey game, you know, the one sport that self disciplines with bench depleting brawls.

No matter what anyone believes, Matt Cooke is expected to drop the gloves. The questions that will be answered in due time is with whom, and who will end up on top.