Kovalchuk will be on the radar for many come trade deadline

Ilya Kovalchuk will undoubtedly be the biggest name in free agency this summer if the Atlanta Thrashers fail to sign the winger to a long-term deal before the free agency period hits. Even before that, however, Atlanta needs to determine if they will be able to sign the winger at all or if they should ship him out to the highest bidder at the trade deadline.

Atlanta currently sits at 12th place in a tight Eastern Conference race that has the team only four points out of a playoff spot. However, it still remains highly unlikely that Atlanta would advance beyond the first round even if they make it to the playoffs, which roughly translates into the fact that they would be better off shedding their assets at the trade deadline to get the best return. And they certainly could get a hefty return for a star like Kovalchuk. But who exactly might be interested in Kovalchuk’s services and what price would they pay for a player who has tallied 40 or more goals in each of his past four NHL seasons (and likely will do it again this year) and has 90 or more points twice in that span?

The price tag would involve more than just high-end draft picks for the next four-to-six years. Atlanta would want roster players in return, players that will contribute sooner than later and help the team rebuild. Teams like the Calgary Flames and the Chicago Blackhawks and names like Dion Phaneuf and Patrick Sharp have been mentioned by other bloggers in return for the star left wing. But if other teams jump in, the price tag might go up and those teams might be forced to shell out a high price for what could cost them more in the long run.

Chicago is coddled pretty close to the cap right now, and will be for seasons to come after signing youngsters Kane and Toews to similar 5-year deals just a few months back. The addition of Kovalchuk would give Chicago unprecedented scoring depth, but Chicago might have to give up 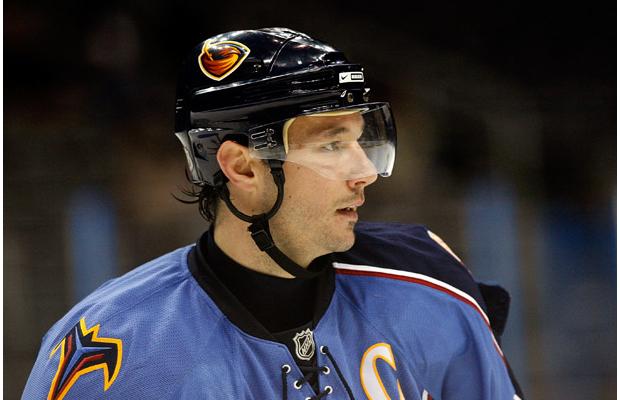 defensive depth or role-players like Sharp or Dave Bolland. Unfortunately, as great as offense is during the playoffs, you need your grinders to win some tough games for you. Chicago could also consider shipping goaltender Cristobal Huet to Atlanta, but does Chicago really want to go with an inexperienced netminder in Annti Niemi for the playoffs, even if he has outplayed Huet for the majority of the season? Those price tags may not be too high for Chicago,  especially if the team has a win-it-now attitude. Cap issues might prevent them from being in this position again for years to come.

The New York Islanders were another name mentioned in regards to Kovalchuk. For the trade deadline? Don’t even think about it. The Islanders are a young team in rebuilding mode and there is no way they would give up their young core for Kovalchuk right now. However, the Islanders have the cap space and certainly would toss out a few hefty offers to bring Kovalchuk to New York in the offseason.

What about the San Jose Sharks? Here is a team that has been solid for several years but has never been able to get over the hump and make it to the Stanley Cup Finals. The addition of Dany Heatley certainly will help that cause, but adding Kovalchuk would give them a great offensive edge in the playoffs. For that to happen, San Jose would not only have to give up draft picks or prospects, but a player like Ryane Clowe or Devin Setoguchi might be part of the package, too.

If the Los Angeles Kings are buyers at the trade deadline, they could possible make a pitch for Kovalchuk. Rumors have been circulating for a long time about the Kings wanting to trade away left wing Alexander Frolov.

The Bruins are only one point out of a playoff spot right now, but they are reeling from the loss of Phil Kessel in the off-season and injuries to Marc Savard and Marco Sturm have severely hampered their play. However, Savard, when healthy, is one of the best set-up men in the NHL and Kovalchuk would benefit greatly from Savard’s passing abilities.

New Jersey would probably love to add another superstar scoring threat to their roster. But might players like Travis Zajac, Jamie Langenbrunner or Patrik Elias need to pack their bags in order for that to happen?

Pittsburgh could make a run, but they probably don’t have any draft picks or prospects to give after acquiring Marian Hossa a few years ago from Atlanta at the trade deadline.

It would be interesting to see if the Washington Capitals place a bid. Ovechkin, Backstrom and Kovalchuk? Oh my indeed. With Ovechkin and Kovalchuk both playing for Team Russia in a few weeks, might the topic come up in the locker room or off the ice between the two? But would Atlanta want a player like Alexander Semin in return, or would they settle for players like Brooks Laich, Matt Bradley or Tomas Fleischmann? Washington might even consider shipping out goaltender Jose Theadore if they believe back-up Semyon Varlamov to be the goalie of the future in Washington.

The trade deadline will come up quickly after the Olympic break, and Atlanta has some tough decisions to make in regards to their franchise player. However, the rest of the league will have tough decisions to make as well. How big of a price are you willing to pay for a star like Ilya Kovalchuk? Especially when there is no guarantee that you could win the Cup with Kovalchuk, or that you would be able to resign him in the off-season. Reports indicate the Kovalchuk wants at least $10 million a season when he signs his new contract, meaning that a lot of top-end teams would be giving up a lot to make a run at the Cup and get little in return afterward. If Atlanta does decide to trade Kovalchuk come March 3, the winner of the Kovalchuk sweepstakes might also end up becoming the biggest loser in the long run.