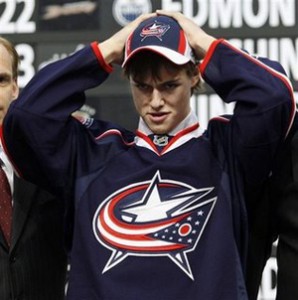 Columbus Blue Jackes 2008 NHL Entry Draft prospect Nikita Filatov expressed is unhappiness with the organization. The 19 year old signed a three year deal with the organization, has specifically pointed out head coach Ken Hitchcock. Either changes need to be made, or he plans on not coming back.

The team will most likely not make the playoffs. Also, head coach Ken Hitchcock will likely be removed before the season is out. But who does this 19 year old kid think he is?

Filatov is a 19 year old who if he has such a problem, can go play in the KHL on his home soil. He would make more money, no doubt about it. But there is a reason players want to play in the NHL. Let the boy learn the hard way, let him understand he is not the voice of the team and he needs to learn the ropes before demanding such things.