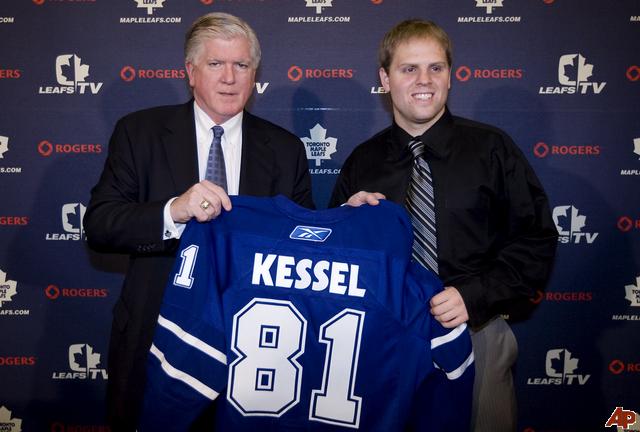 The Toronto Maple Leafs currently sit dead last in the league with six points and one regulation win and only 30 goals for over the duration of 12 games, which is better than only a handful of teams. But the Leafs will get some much needed help early this week when forward Phil Kessel returns from long term injured reserve after off-season shoulder surgery. Kessel ended last season with 36 goals and 24 assists in 70 games with the Boston Bruins. Boston traded the star right wing to Toronto in the off season where he quickly signed a five-year, $27 million contract.

Reports indicate that Kessel will be in the lineup as early as Tuesday when the Leafs host the Tampa Bay Lightening. He has been skating for a solid three weeks with the team and has even been participating in contact drills in practice. This could be great news for Leafs fans who are highly anticipating the debut of Kessel in hopes that he will help lead an otherwise lackluster offense. As of now, defenseman Tomas Kaberle leads the team with 17 points. The next best point total comes from Mikhail Grabovski, who has 10.

Such high expectations may be sorely misplaced, however, at least at first. Kessel has been out of action all summer, which means that he will need a few games to say the least to come up to speed and get his timing back. Also, a significant debate is brewing in Toronto as to who will be the best fit to center the Kessel line. As a true goal scorer, Kessel plays better when he has a good passing center to feed him the puck. In Boston, center Marc Savard was the main set-up man for Kessel’s goals. Matt Stajan and Mikhail Grabovski seem to be the front-runners at this point to pair up with Kessel, and chances are good that each player will get a legitimate shot to see who sticks and where the best chemistry comes from. No matter who ends up on a line with Kessel, chemistry may take some time to build.

Two weeks might be a fair assessment for things to start clicking for Kessel and his new linemates, whoever they may be. Regardless, the Leafs brought in Kessel to score goals and help out their swindeling offense, so expect Kessel to get minutes into the twenties almost immediately. The boy needs to be on the ice if he’s going to score goals. Maybe Kessel will bring some of his plus-23 defensive play into the lineup as well, which the Leafs may need more than goals.