Phoenix Coyote’s owner Jerry Moyes has agreed to sell the team to the National Hockey League. The team, who filed for bankruptcy, has gone through a bitter battle for ownership. Moyes originally intended to sell the team to Jim Balsillie but was rejected by the other NHL team owners, later to be rejected by a court’s decision. Balsillie is CEO to the Canadien company Research in Motion, best known as the developers of the BlackBerry smartphone.

The deal between Moyes and the NHL still has to be approved by the court and should be decided upon very soon, potentially Monday.

If the court approves, the NHL intends sell the team to a new owner immediately, with hopes of that owner keeping them in the desert of Arizona. Perhaps lofty goals, but the NHL hopes to close on the sale by November 2nd.

NHL officials have met with representatives from Ice Edge among other potential buyers. Recent news though has shown that an interest from current Canadien Football League Toronto Argonauts co-owners Howard Sokolowski and David Cynamon are intending to put together a bid as well.

It is presumed this season will finish out in Arizona, but who knows about next year? Whoever makes a bid has to work out a new agreement with Jobing.com Arena, but will it have enough weight to keep them in the desert? Is the future based on the productivity of the team? 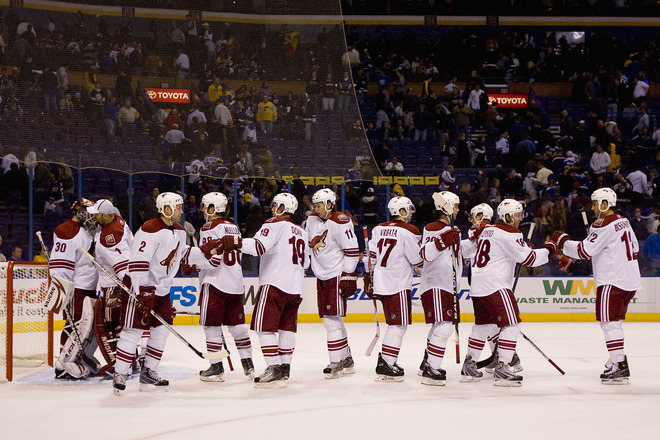 Phoenix Coyotes may have a new owner relatively soon.

Who knows what the future holds for the Phoenix Coyotes, but so far the team currently is off to a great start, 8-4-0 record, 5th place overall within the Western Conference. Just last night the team defeated the St. Louis Blues two to nothing, as net minder Ilya Bryzgalov put up his 3rd shutout this season.

Even with the spectacular play, ticket sales are still down. For this year, enjoy the warm weather Coyotes, next year you may be moving to a colder climate. Time will reveal all, but I do hope you stay in the desert.